Hang On And Fight

Pink is a tantalizing great start to a promising serial that follows Riley’s first day as she applies for the military in a dystopian future existence. J.B. Cantwell does a great job at getting into the mind of our young recruit. Riley is not perfect, and she does not do well in all areas, but it makes her more human as a character. The world that we enter into is vivid and, though futuristic, not too difficult to imagine being one that may indeed not be far off the mark! 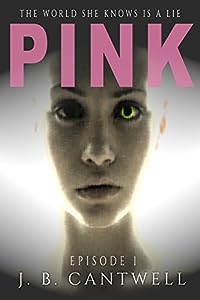 Riley Taylor, a girl living in 2095, underwater Brooklyn, is leaving her abusive home and hoping that a spot in the military will provide enough cash to last her several years on her own. The service is always looking for new recruits to fight the many wars the United States is involved in. Trouble is, only 20% of those who enter the service will survive the three year term and collect the handsome stipend waiting for them at the end. She’s willing to take the chance, but once she gets in, she finds that all the normal rules of society don’t apply. With no escape, she has no choice but to hang on and fight for her life.

Pink is a serial read, which means that several shorter segments will be released about once a month. This is a clean read for ages 13+, but it deals with some heavy issues too mature for the crowd below 13.