Christian Kallias was born in Geneva, Switzerland. As a teenager, he was forever imagining stories, enjoying video games and creating various art projects. With his sight always set towards the stars: his novels reflect many of his favorite things, like Wing Commander, Star Wars, Star Trek and Babylon 5. Christian’s utopian aspirations for a better world where humanity shines and evolves towards a higher level of civilization, often find their way into his stories. 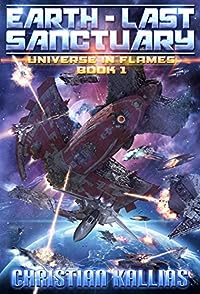 When the evil Obsidian Empire delivers a deathblow against the Star Alliance, fighter pilot Lieutenant Chase Athanatos leads a band of scattered survivors to the farthest reaches of the known universe, to a little planet called Earth. But Earth is in trouble. The Obsidian Empire is hot on their trail, and unless they find a way to stop them, what’s left of the Alliance and the entire planet are doomed to extinction.

With the help of the beautiful Commander Sarah Kepler and under the guidance of the goddess of love Aphroditis, Chase races against time to find a way to save the planet from total annihilation.

Unbeknownst to him, something dormant is coursing through Chase’s blood.
But does it hold the key to changing their destiny ? 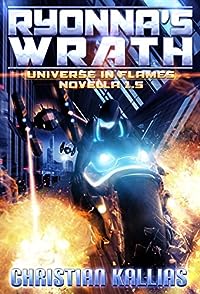 Ryonna’s Wrath: Universe in Flames 1.5 – A Novella
by Christian Kallias

This book is the first Novella in the Universe in Flames saga. It can be read independently from the series or as part of it (timeline info below).

Ryonna, the Droxian who helped Chase and Sarah in their fight against the Zarlack forces threatening Earth, embarks on a mission to rescue her abducted son, Ronan.

To infiltrate Hellstar, the maximum security prison her son is being held in, she needs to acquire vital information. An unlikely alliance raises shadows from her past and it quickly becomes clear that the reasons behind the bounty on her head run deeper than she could ever have imagined. This shocking revelation will turn Ryonna’s life upside down.

While saving her son remains her top priority, Ryonna embarks on a series of deadly missions in order to uncover the truth behind it all. In the process, she puts her life and even her sanity on the line at every turn…

Timeline: The events of this Novella take place between book one (Earth – Last Sanctuary) and book two (Fury to the Stars) of the Universe in Flames saga. They focus around Ryonna’s character. While it is not necessary to have read these books to enjoy this Novella, you’ll understand each reference to other characters and mention of races as well as some other world building details better if you did. If this is the first book you read from me, worry not, you can still go ahead and read it. 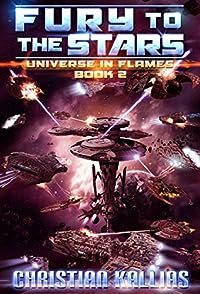 With Commander Sarah Kepler imprisoned and being brutally interrogated by her captor, Chase learns more about his birthright powers as he tries to locate her. It soon becomes clear that he must learn to control them or he could end up destroying the very universe he’s trying to save.

Meanwhile the Destiny battle group is being escorted to Droxia to answer for their actions, unaware of what awaits them upon their arrival. On Earth, humanity licks its wounds when some unforeseen acts of terror threaten the newly found peace that the fresh and frail Alliance brought along with their arrival.

An unexpected ally surfaces with information that could tip the balance of power for the first time since the Obsidian Empire obliterated the Star Alliance. But considering his past actions, can he really be trusted?

Chase is determined to save his beloved Sarah at all cost, but with the fate of the universe in the balance and his overwhelming powers quickly coming to the surface, his task is not an easy one. Neither is the growing burden of responsibility already eating at his soul.

Choices and sacrifices are to be made. But will Chase be able to live with the consequences of his actions? 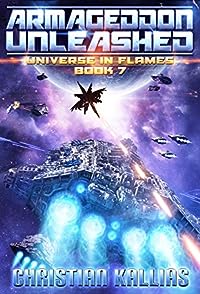 With Gaia 2’s threat looming over Earth, Captain Chase Athanatos embarks on a perilous mission to take down the evil Artificial Intelligence once and for all.

The biggest battle and challenge Chase has ever faced awaits him; one where his strength of character and spirit will be tested at every turn. Can Chase best Gaia 2 on her own turf? Or has the Earth Alliance bitten off more than they can chew?

Meanwhile, Oryn plans to take control of the Furies with some new technology she’s been developing. When the time comes for Fury trial, she doesn’t hesitate to use her own brother Miseo to test its efficiency.

The battle to regain Earth has begun. The stakes have never been higher, as are the dangers and consequences should our heroes fail their daring mission. 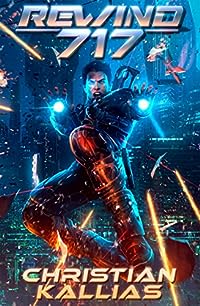 If you ever wondered whether your Freedom and Privacy are worth giving up for an illusion of Safety: You should enjoy reading this book

The year is 2175. Ex-military Agent Cole Seeker works for REWIND, a Top Secret Government Agency. Thanks to a rare DNA marker in his genetic make-up, he is the only one capable of jumping back a maximum of 717 minutes in time to prevent terrorist attacks and disasters from taking place.

When New Geneva suffers a nuclear strike, he jumps back in time to rewrite history and a race against time in what was once the heart of Switzerland ensues. Cole hunts down a ruthless but cunning terrorist that has escaped his grasp on many occasions during past missions. Cole is determined to end this man’s life once and for all, even if it means breaking mission protocols.

With the aid of his brain-enhancing AI implant, TAIHNA, Cole struggles to save the city from annihilation but soon discovers that nothing is as it seems. Now, he has to make an impossible choice with unpredictable outcomes…