For those fascinated by the tragedy of the Second World War… this book, the first in a trilogy by B J O’Connor, fills a gaping hole in taking the reader on an intensely, legal, moral and political journey of emotional discovery. Put simply it is alternative history at its finest. 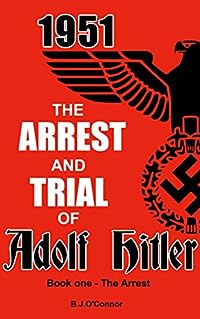 Six years after the thousand year Reich collapsed in the blood and rubble of a shattered Berlin. Brilliant Jewish Barrister Nathan Daniels meets secretly with the Prime Minister of New Zealand on a matter of the highest national importance. Unsure what to expect, he is shocked when he learns of the arrest of an illegal alien on an obscure backwater farm.

He is even more astonished when the Government asks him to defend the former Führer of Nazi Germany, at a soon to be established International Military Tribunal. A Jew defending the greatest anti-Semite in human history! It is a decision that he fears will plunge his family into the toxic wasteland of Nazism and the Holocaust.

The arrest meanwhile creates a foreign policy nightmare between East and West that rips open the barely-healed scars of World War 2. Stalin demands Hitler is hanged in Red Square, an ultimatum that puts him on a collision course with Washington and London.

In the eye of this storm, the now freshly-knighted Sir Nathan Daniels must battle his guilt, shelter his family from public fury, while striving to ensure his client receives the fairest trial under impossible circumstances.