When carried away on a flight of fancy, Bronwyn Elsmore might say that if she’d been gifted with a better voice, she might have chosen to be an opera singer. Sadly for her, that wasn’t the case, but luckily she found she could write. A good list of awards for short stories, plays, and verse confirms that. Throughout her long writing career Bronwyn has been an advertising copywriter, freelance writer, contract writer, editor, education writer, academic writer, playwright, and writing tutor and mentor. She has written over a wide variety of genres – articles, short stories, poetry, stage-plays, fiction and non-fiction. These three books show that versatility. 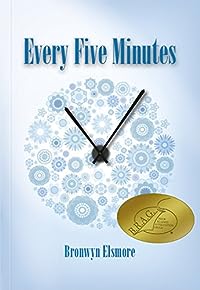 Every Five Minutes
by Bronwyn Elsmore

Gina, if that is her real name, wakes to an autumn morning and, against her better judgement, selects a light dress to wear to work. Deliberately, she misses the bus and walks into the city, then turns and walks back home. This is not a day for work. Tomorrow, in her navy pantsuit, she will be there. Today she will spend with a white dog and a remarkable man.

Every Five Minutes is also about the colour cornflower blue, beaches, parks, city streets, exotic places, coffee, flowers, polished stones, a unicorn and a swan, words, theatre, movies, music, and love. But most of all it’s about Gina, the dog, and the man.

Every Five Minutes is a B.R.A.G. Medallion Award book. 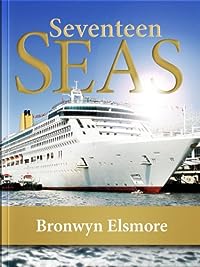 Is there really a stowaway in one of the lifeboats? And what’s the truth about Germans and deckchairs? On a cruise ship full of passengers from different countries there’s bound to be plenty of fun.
Seventeen Seas follows a voyage through ten countries, fifteen ports, across seventeen seas, for forty-six days. Stories of the journey itself and the multiple destinations are told through the viewpoint of a variety of characters.
“Seventeen Seas is a travel-book with a difference.”
Excerpts –
– In such a closed community rumours are bound to spread. And they did.
– The ship’s sister was now visible from the bridge – every square foot of the promenade was occupied.
– The acknowledged heavyweights led the wave that swept through the stores in the Ocean Terminal out into Canton Road, then surged down Peking Road towards Nathan Road.
– Step after step, eyes fixed rigidly on the end of each span, Ngaio moved on.
– “You like gods? Pictures of Indian gods,” said a pair of boys working in tandem. “Elephant-head god, monkey god, god with six arms… ”
– Yvonne thought of Eduardo and the woman who was prepared to travel in a train for a total of twelve hundred kilometers to see him for a few hours.
– Once again Lynn heard that it was the Germans who were monopolising all the deck-chairs. In her forays around deck, however, she had noted a decided lack of anything she recognized as a Teutonic accent.
– Dick wondered if a fleet of speedboats under orders from a Somali warlord was heading towards them at that very moment.
– All the bodies stretched out on display showed no regard for the local dress code – men sported briefs that didn’t stretch to warrant even that name; the women’s bikini bottoms couldn’t be smaller and the tops were often non-existent.
– If there were gods like this right on hand among the reeds of the Nile, why had Cleopatra lusted after the Romans?
– With the Greek pantheon including its own Goddess of Dawn, the arrival at their shore of a Roman rival was bound to cause offence.
– Jovial Joe, passing through the lounge area on the lookout for last-day opportunities to cross off another joke from his list, saw his opportunity. 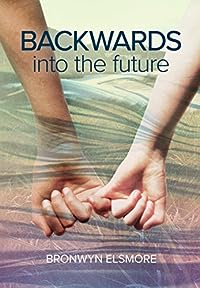 Backwards Into the Future
by Bronwyn Elsmore

You can’t go back, her friends say, but Mary has to do it. Going back to her old hometown is the only way she can silence a voice from the past. And find her childhood friend, Ana.
Kui is pushing her, Ana is holding back, and between the two women there’s much to be resolved.

The plum tree and the manuka have gone, but a lemon tree thrives. The mystery surrounding the last voyage of the Marakihau may never be solved; but if Ana returns, their friendship and some things from the past can be recovered. Can’t they?