History comes alive in these captivating novels by James Conroyd Martin.  The Poland Trilogy contains all the sweep and romance of the classic romantics such as Gone with the Wind and Doctor Zhivago, with a heroine who remains strong in the face of both personal and political tragedy. An enthralling tale of courage, survival, and hope, Anna Maria’s story is at once timeless and timely. Readers will revel in this engrossing tale of courage, family loyalty, and the Polish Nation. The Boy Who wanted Wings tells of A young man with dreams of greatness is swept up amid the deadly clash, but will he have to sacrifice love itself to become an elite defender of his homeland? It is a powerful, emotionally moving story that readers will not want to miss. Enjoy!

Engaging and opulent, THE WARSAW CONSPIRACY unfolds as a family saga set against the November Rising (1830-31), partitioned Poland’s daring challenge to the Russian Empire. Brilliantly illustrating the psyche of a people determined to reclaim independence in the face of monumental odds, the story portrays two brothers and their fates in love and war. Michal is a seasoned veteran soldier, cautious of the evolving conspiracy; Jozef, his much younger brother and impassioned cadet, finds himself caught up in the vortex of a daring plot to abduct the Grand Duke of Russia. With Siberia or emigration to France looming as heart-rending contingencies, matriarchs Anna and Zofia stay steadfast in their resolve to steer the clan through ever-muddying waters. 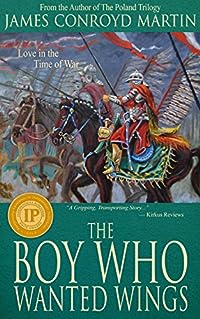 The Boy Who Wanted Wings: Love in the Time of War
by James Conroyd Martin

GOLD MEDAL WINNER in the Independent Publisher Book Awards, the IPPYs. The organization is the world’s largest book awards competition. The novel, winning in the Military/wartime category, is both a love and war story that culminates in one of the most crucial and consequential battles in history.

The FIRST 9/11 attack actually occurred at Vienna on September 11-12 in 1683 when the Ottoman Empire stood poised at the gateway to Christian Europe with the intention of forcing Islam on the entire continent. After a months-long assault, the Turks were just hours away from bringing down the weakening citadel and imposing jihad.

Aleksy, a Tatar raised by a Polish peasant family, holds in his heart the wish to become a Polish winged hussar, a Christian lancer who carries into battle a device attached to his back that holds dozens of eagle feathers. As a Tatar and as a peasant, this is an unlikely quest. When he meets Krystyna, the daughter of the noble who owns the land that his parents work, he falls hopelessly in love. But even though she returns his love, race and class differences make this quest as impossible as that of becoming a hussar. Under the most harrowing and unlikely circumstances, one day Aleksy must choose between his dreams. 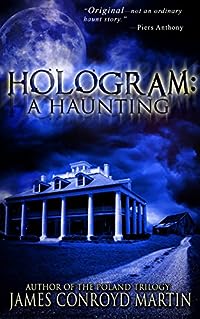 “This is not an ordinary haunt story. There are nice bits of original thinking along the way, especially in the relevance of the title, and the dénouement left me with mixed feelings, identifying as much with the haunts as with the protagonist. I saw the terminal fillip coming, and it gratified me.”
~~Science fiction and fantasy writer Piers Anthony, author of the Xanth Series

Hologram opens when Chicagoan Margaret Rockwell falls in love with a wonderful old Greek Revival home in Hammond, Indiana, and convinces hesitant husband Kurt that fate meant it for them. So begins a journey that will take them down a circuitous path fraught with the unknown — and danger.

Why do the Rockwells, expecting their first child, seem at once welcomed and repelled? What does it mean when Margaret starts to dream of the family that built the house in 1910? For her, the house comes alive with its own sounds, sights, thoughts, and intentions. How could the death of a child ninety years before impact their lives? And why?