Framed by Colleen Connally has everything readers want in a thriller with its complex characters and surprising twists that are sure to keep you in suspense. Enjoy! 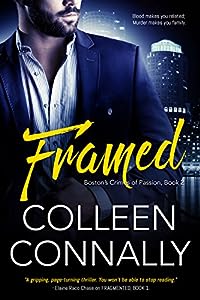 Riley Ashcroft discovers that being born into one of the most prominent and powerful families in Massachusetts doesn’t mean a life of ease. Far from it. Since her father, Jack Ashcroft, took his own life thirteen years ago, she has lived in the shadow of scandal. When her grandmother’s personal secretary is brutally murdered, Riley begins to suspect everything she has been told as a child was a lie. Feeling betrayed, she vows to expose her family’s darkest secrets.

Josh Kincaid, an investigative reporter, is on the heels of a major story. Thirteen years ago, Harrison Taylor’s fate lay in the hands of his lawyer, Jack Ashcroft. In the midst of rumors and scandal, Ashcroft committed suicide and Taylor’s fate was decided. Taylor is a convicted killer, but his grandmother has never stopped believing in his innocence. Now, the woman of meager means has offered a reward for any information that will free her grandson. Kincaid’s interest is peaked, but it isn’t until an anonymous tip suggests that the convicted killer was framed that he takes on the case.

Determined that the sins of the past be revealed, Kincaid and Riley search together for answers to the questions that were silenced by Jack Ashcroft’s death. But there is a killer out there that has already proven he will do whatever necessary to keep those secrets buried.

In this tale of deceit and twisted revenge, the two soon realize that no one can be trusted, not even each other…