Where dystopian novels are a dime a dozen, Altabef creates an epic tale that stands out…. Altabef does a fantastic job of making concepts thought-provoking and delightful to read. Red Death will appeal to a wide audience since it has something for everyone. It’s action-packed, with plenty of chases and fights for those who enjoy adventures and drama. There are enough twists to surprise those who are intrigued by political intrigue, suspense, and cliffhangers. Amid kingdoms to unite, princes to save, and lives on the line, there is also a playful romance sprinkled throughout for those who desire some lightheartedness. Enjoy! 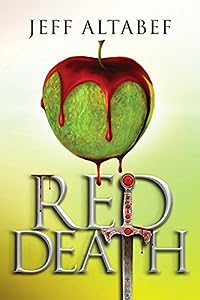 What happens when everything you believed turns out to be a lie?

“The Soulless are Not Human.
To Kill in Jacob’s Name is Just.”
– The Guardians’ Sacred Motto

The Red Death reigns over the world, killing all who come in contact with the plague in their early twenties, their souls stripped away as punishment for ancient sins long forgotten. Only those in the secret enclave known as Eden are spared from the plague. Seventeen-year-old Aaliss, a sworn Guardian, protects Eden from the Red Death by killing outsiders who stray too close.

When her odd younger brother, Wilky, discovers a cure to the plague, the corrupt High Priest brands them as traitors. Forced to flee, they seek refuge in the last place she’d every thought she’d go — the land of the Soulless. Here she’s plunged into a medieval world filled with witches, magic, and warrior kingdoms run by Elders only a few years older than them.

Aaliss yearns to return home, but when her heart tugs her deeper into the world of the Soulless, she questions everything she once believed. Has her soul been taken? Will she and Wilky fall victim to the Red Death, or will they die in the center of a battle that threatens to tear the Soulless world apart? Or… might Aaliss finally find, against all odds, what her heart has yearned for all along?