Discover a beautifully written series, Sisters by Design, by author Sharon Srock. Srock delivers a powerful story of one woman’s journey as she breaks free from a cult with her son and mother. It will bring tears to your heart and make you shiver the whole read through.  How does one set herself free from a cult and begin to know the love and grace of the one true God? Find out for yourself in book 1 Mac (Sisters by Design). 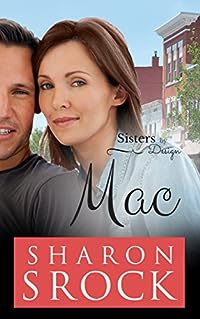 After separating herself from the oppressive cult where she was raised, Mackenzie Soeurs has two dreams: to give her son Riley a better life than she had, and to live in peace, as far from the harsh God of her past as she can get. At least that was the plan until her son got hauled to jail for theft and she lost the mother she never truly understood. In the darkest moments of her life, Mac finds herself surrounded by a group of Christian women she can’t understand and a handsome man, willing to take her son under his wing.

Dane Cooper, Garfield’s former bad boy and groom left at the altar, can’t deny his initial attraction to Mackenzie. Neither can he resist the urge from God to mentor her delinquent son. How can he guard his battered heart and still give Riley the same second chance he was given?

When Jesse, Charley, Randy, and Alex signed up for Mac’s first fitness class, they were looking for someone to whip them into physical shape. What they found was a woman bound by a cruel history, suffering through a tragic present, and in desperate need of a friend… or four.