A thrilling tale by author Lee Brainard, that contemplates the approach of the apocalypse through the lens of catastrophism and electric universe theory. A rookie astronomer discovers a massive comet on collision course with Mars, a rendezvous that would cause chaos in the solar system and threaten Earth.  Bucking a massive government cover-up, she sends the evidence to a friend. This leads to her confinement in a FEMA camp and forces two other astronomers to go on the run.  Volume one in the Planets Shaken series. 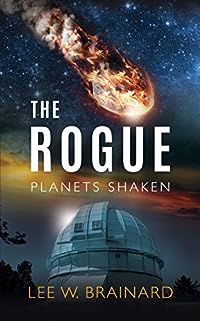 “Men’s hearts shall fail from fear… for the planets of the heavens shall be shaken” (Luke 21:26).

When rookie astronomer Irina Kirilenko discovers a planet-size comet in the Kuiper Belt on a collision course for Mars, she first faces stonewalling from the Minor Planet Center, then coercion and stricture from NASA. They press her to embrace an ingenious reinterpretation of her discovery and ban her from talking about it.

It slowly dawns on her that the government is fostering a massive conspiracy to keep the public oblivious to the truth — Earth is facing an existential threat. Unwilling to be silenced, she recruits fellow astronomer Ariele Serrafe to evaluate her discovery, placing both in the crosshairs of government agents.

Set in a dystopian vision of the near future, The Rogue, the first volume of the Planets Shaken series, weaves the threads of biblical prophecy, ancient history, government conspiracy, and electric universe theory into a thought-provoking, tensely plotted thriller — one that asks us to reconsider the nature of the universe and the destiny of the world.