Who Reaps The Souls

Fast-paced and captivating, this wonderful collection by NY Times and USA Today Bestselling author Thea Atkinson is one not to be missed. Enjoy! 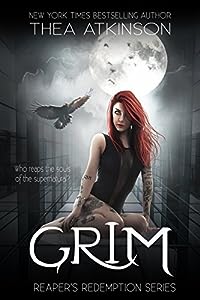 Who reaps the souls of the Supernatural?

Ayla doesn’t believe in monsters. There are only bad people with bad intentions. But she does believe in helping someone in need. So when a text from a long lost friend flickers across her cell phone, asking to meet at the abandoned Gothic cathedral downtown, she can’t resist answering the call.

Except her friend isn’t there when she arrives. Instead there’s a tattooed psychopath bent on making her his next victim.

That’s when Ayla discovers that not only is she surrounded by monsters, but she is actually one of them.

Grim is the first installment of the hot new Reaper’s Redemption series, an urban fantasy collection with supernatural creatures of all kinds and an unexpected love triangle. If you enjoy clean but romantic stories with supernatural beings and heroes in unexpected places, you will want to pick up your copy of Grim.

ONE CLICK today and find out instantly if you believe in monsters. 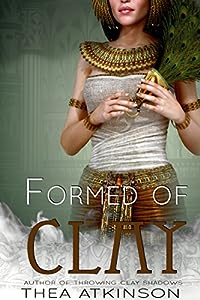 Formed of Clay: (a short novel of ancient Egypt)
by Thea Atkinson

In ancient Egypt, betrayal will cost you your soul
Young Sentu enters the elite world of Egyptian priesthood in order to learn the new letters of Pharaoh Menes’s court.

He soon learns that not all is as holy as it appears in the privileged world of scribes and priests. Black magics and malice abound in the court of the first pharaoh of ancient Egypt, where Book of the Dead theology is twisted into an avenue for personal gain, and the High Priest offers ritual sacrifices that involve involve anyone who stands in his way to ultimate power.

When Sentu discovers a plot to unseat the Pharaoh that involves a beautiful Nubian sorceress, Sentu’s own world crashes around him, leaving him to find his own dangerous path to justice.

Formed of Clay is a short novel of ancient Egypt written for the new adult historical fantasy fan mixed with a touch of metaphysical thriller. It transports the reader into a dark exploration of a world before the pyramids in a time rich with ancient Egyptian history and Egyptian mythology, a time when betrayal and sacrifice made coming of age more dangerous than we could imagine.

This story creates the background history for characters in the novel Throwing Clay Shadows: historical fiction set in 1800s Scotland. 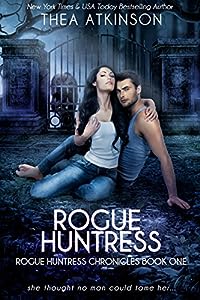 What kind of assassin gets her alpha murdered.
The kind that is attracted to a human man apparently, and because of it, Shana is now at the mercy of her foster brother’s lust for power as he uses mercenaries to take over the pack.

Now Shana must submit to him as bondmate or lose all she holds dear.

Trouble is, she’s just not the submissive type.

Rogue Huntress is the first full novel in a new urban fantasy series with a touch of steamy romance and more than a hefty dose of kick-butt action. In one reader’s words: “an action packed runaway train that starts off fast and never slips down”. If you like your werewolf shifter romances with strong female characters that are more than equal to their stoic, badboy love interests, you will enjoy Rogue Huntress.

Half a Huntress (Rogue Huntress Chronicles Book 0)
by Thea Atkinson

SHE THOUGHT NO MAN COULD TAME HER
What kind of assassin gets her alpha murdered?
The kind that is attracted to a human man, apparently, and now because of it, Shana’s brothers might not live to see the full moon.

Half a Huntress is the opening story of the tantalizing new urban fantasy series The Rogue Huntress Chronicles. If you enjoy heroines who are far from wilting flowers, you’ll devour Half a Huntress.

ONE CLICK now to start reading instantly and get devoured. 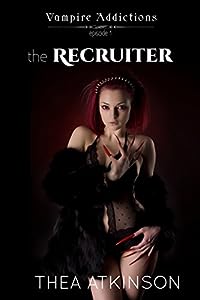 The Recruiter is meant as a ‘taste’ of The Priestess and the Vampire from NY Times and USA Today Bestselling author, Thea Atkinson

Sassy Jade Sanchez has just been dumped after four years of devout monogamy, and she’s starving for a little affection. Her self-esteem is shattered, her confidence damaged, and she’s had so many ugly cries she’s afraid her face will never be the same. Enter hot as hell Sam, who asks her to an upscale costume party. It sounds like just the ticket to squeeze the last bit of melancholy from her system. Hell, if she’s lucky, smoking hot Sam might make a move on her.

Three drinks in, and Sam abandons her to a greasy Dracula who seems bent on getting her into some sort of S&M action that involves teeth and necks and declarations that her vulnerability tastes like Chianti. She’d knee the guy in the groin except her feet have taken root to the tiles. It takes the handsome Viking host to extract her from the costumed nosferatu, but it’s an ironic rescue at best.

She’s been recruited, and vampire bait ain’t nothing if it isn’t fresh.