Hide My Sins Under Glitter

I might be a little obsessed with Christmas. I am doing things now to get prepared for the holiday season, such as painting the baby bassets rooms, cleaning out the coat and hall closets, and making room in the attic to hide gifts. As if they won’t be trashed again in a few weeks. I saw the Hallmark Channel was airing some new original Christmas movies and I freaked out! My freak out involved me screaming, grabbing snacks, and plopping in frot of the TV for some Christmas sappiness with a big ol grin on my face. Yes there were some tears, but in the end it all turned out okay. OH THE CHRISTMAS MIRACLES!! This is the same person who screeches in horror when I see the Christmas decorations on sale too early at the stores though. Go figure. Either way I think I need to avoid the Hallmark Channel for a while. See if I can shake this Christmas feeling and enjoy my summer. 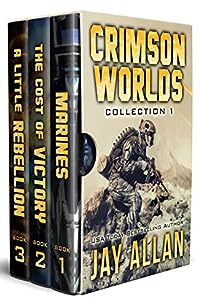 The Cost of Victory (Crimson Worlds 2)

The Third Frontier War is raging, and all across human-occupied space worlds are burning. Massive fleets struggle for dominance and kilometer-long war ships exchange thermonuclear barrages.

Battered in the early years of the war, the Western Alliance is resurgent. The brilliant Admiral Augustus Garret leads the Alliance fleet from victory to victory, taking the war to the very heart of the enemy empires. And on the ground, Colonel Erik Cain, hero of the Marine Corps, leads his crack troops again into combat, seeking the final battle.

But war is the province of more than soldiers in the line, and in the background, the secretive intelligence agencies of the despotic Superpowers plot and scheme, using their own soldiers as pawns in the great game for control of space.

The final battle will be fought in the reddish sands of a backwater world, where the rivalries of the Superpowers are about to become irrelevant, overshadowed by a staggering secret that has lain hidden in a remote cave for untold centuries.

All the Powers struggle for the ultimate victory, but at what cost?

The Third Frontier War is over, and the Western Alliance is triumphant. All across human-occupied space, colony worlds celebrate the coming of peace. But peace is an elusive dream, and more trouble is brewing. The war was expensive, and the economies of the Superpowers, always fragile, are on the verge of total collapse.

The Directorate, the shadowy intelligence organization that has become the true power behind the Alliance government, plans to strip the colonies bare to pay the costs of war. Already, they are tightening their control over the freewheeling colonial governments. And the Marine Corps faces total destruction at the hands of the worst traitor in its history.

But the colonists are a different breed than the passive mob on Earth, and they have no intention of meekly surrendering their hard-won freedoms. On worlds all across the frontier, plans are hatched and weapons hoarded. And in taverns and meeting halls the words of an ancient text are uttered in hushed tones. A little rebellion, now and then, is a good thing.

Standalone, Can be Read at Any Point:
Red Team Alpha (A Crimson Worlds Novel) 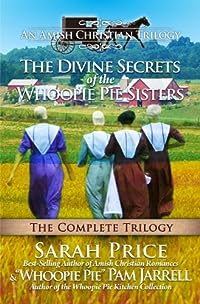 Follow the story of four Amish sisters who run Whoopie Pie Place, the best known bakery outside of Berlin, Ohio. Each sister has a secret that influences their lives and, unknowingly, impacts each other. Yet, little by little, the pressure of balancing their responsibilities of their daily lives with their individual secrets becomes harder to manage.

The Divine Secrets of the Whoopie Pie Sisters is a different type of Amish Christian story. By blending Sarah Price’s 25 years experience of living among the Amish in Pennsylvania with Pamela Jarrell’s extensive 15 years experience interacting and befriending the Amish in Berlin, Ohio, Price and Jarrell team up to give the readers a new type of story that focuses not so much on romance but on friendships and the reality of day-to-day life living among the Amish.

This book contains all three of the original “books” plus recipes and hymns from the Ausbund. Also, a sneak peek at Whoopie Pie Place, the sequel to this series due out in 2014. 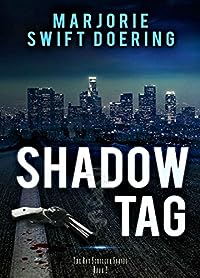 On the eighteenth floor of a Minneapolis office building, a pearl-handled revolver remains clutched in an executive’s hand — an entry wound in his temple. Suicide? The ACC Board of Directors insists that’s what it is, but Detective Ray Schiller is convinced someone — possibly a number of people — know more than they’re telling… a lot more.

No fan of the victim while he was alive, even with a personal life as complicated as his case, Ray is determined to see justice done or die trying. He and his partner have no idea that is a very distinct possibility.

From the author of the much acclaimed Dear Crossing, Marjorie Swift Doering’s new book would appeal to anyone interested in the best of crime thrillers and mystery 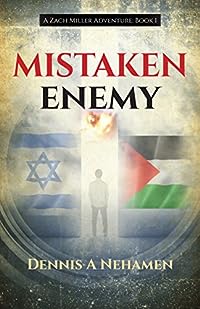 A Story Exploring Both Sides of Fate

Free-lance writer Zach Miller doesn’t mind going the extra mile for a good story, but 7,500 miles is a bit more than he bargained for. Nevertheless, when his closest friend fortuitously points the way to Israel, reluctantly he goes.
In the caldron of intrigue, politics, and terrorism that is the modern Middle East, Zach uncovers a plot — one that potentially threatens the lives of perhaps millions. His problem? There are two sides to every coin, and at least two sides in every war. But in this kind of conflict, information is a commodity, and misinformation, a weapon. Zach might be the unexpected emissary, the man with an answer, but sadly, neither side trusts him. Worse still, both sides will do anything in their power to stop him.
Far from home, in a strange and at times incomprehensible land, Zach has no resources other than his own ingenuity… and a desire to be on the side of truth. That might be too tall an order in an encounter where both combatants are dead certain that there is only one truth: theirs.

Mistaken Enemy, the first of the Zach Miller Stories, is a heart-racing account of hate, revenge and destiny, ultimately testing the boundaries of human love and will. 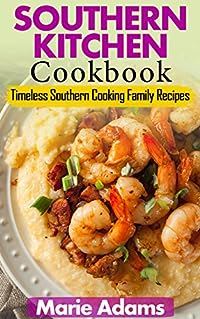 Bring the soulful goodness of Southern cuisine to your table! Your family and friends will love you for it.

We are all familiar with foods that are particularly “Southern” – fried chicken, jambalaya, collard greens, biscuits, and pecan pie, to name only a few favorites. All foods develop from a combination of the tastes and traditions of its populations, together with ingredients that are available in the area. Africa, Spain, France, and Scotland have all contributed to the development of Southern food as we think of it today. Each region brought its own ingredients and cooking methods, and combined them with the fresh local foods to create an irresistible cuisine we all love.

Cooking authentic and traditional Southern favorites is easy when you have the right recipes like the ones contained in this cookbook. Your friends and family will certainly ask for seconds and, of course, your secret family recipes!