The Girl From Guantanamo

The Girl from Guantanamo is a captivating work of the historical fiction genre that electrifies readers with the harrowing tale of Pilar Ruiz, who as an eighteen- year- old in 1958 Cuba, improbably secured the course of the Castro Revolution. In 1958 the author, Donald Lloyd Roth, was a Lieutenant(jg) in the U.S. Navy stationed aboard an iconic Destroyer Escort the USS Raymond. The Raymond made several visits to the base at Guantanamo Bay (GTMO) and an overnight foray into the harbor of Santiago de Cuba at a pivotal juncture of the Revolution. His unique perspective adds verisimilitude to his tale. 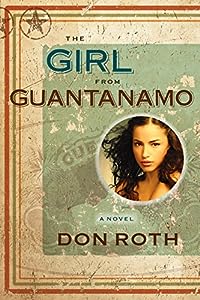 The Girl from Guantanamo
by Donald Lloyd Roth

Pilar was born and spent her early years on a sugar farm, both Santiago and GTMO. Her father Miguel and her uncle Jorge had built separate houses. Each raised a daughter, born within the same week. The cousins Pilar and Alicia were more like twin sisters as Pilar’s mother Maria, mothered both girls because Alicia’s mother died when the girls were one- year old.

For the two families it could be said that sugar was their life.”

When Pilar was nine, Miguel, to give his family a better life, moved them to Miami when he became a sparring partner to international boxing legend Kid Gavilan. Miguel tried, but failed, to persuade Jorge to join them. Life in glamorous Miami was sweet for a growing girl whose father had a good job: not so back on the sugar farm in Cuba where Alicia would succumb to small pox.

The 1950s progressed. A growing unrest with the Batista regime in Cuba was mirrored in Miami. Miguel had instilled in his daughter a love of running and martial arts. Now he was also exposing her to the politics of the rebel cause. When his views caused him to be detained as an illegal alien, Maria and Pilar, at his instruction, fled to Cuba.

Imbued with her father’s deep love of her homeland, Pilar the scrappy girl from Guantanamo meets her destiny with courage. At the request of the rebels she infiltrates the CIA. Using sex as a weapon, Pilar becomes a revolutionary heroine when she uncovers a plot to wipe out the leaders of the Revolution.