We bought new curtains for the family room. This is not an event usually worth mentioning, but the apparently I discovered a love for the taste of my foot. Hubby picked out a lovely blue color and was adamant that it was the perfect color. He was not going to budge on the subject, and he quickly put a set in the cart. I was completely thrown off. I almost fell. First… why did he feel so strongly about curtains? I actually saw him put his foot down. The conversation was over. I was certain he forgot that the room is pumpkin orange and the blue would look hideous….HIDEOUS! Barfy, gross, ridiculous! These were two colors that should never be in the same room, let alone next to each other. The hurt look on his face confused me even more. Then he said the colors were the same ones he used on his website that he designed himself and was quite proud of. Oh…. my… oh… ummm. Yes, the curtains would look perfect in that room! So… is that foot I taste? YUP, and apparently I have been wearing sandals for two weeks. Blegh! 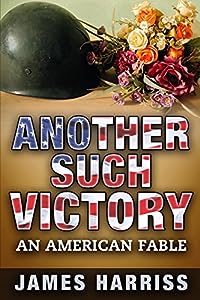 Another Such Victory: An American Fable
by James Harriss

ANOTHER SUCH VICTORY: An American Fable by James Harriss is the story of a classical poet-warrior, cast in the mold of an American soldier, set during the thirty years between 1948 and 1978.

He marries the steadfast Susan Fleetwood, who has had a crush on him since time out of mind, and winds up in Officer Candidate School. Meantime, Laurel leaves home, withdraws from college, moves to New York and marries Dr. Saul Irving.

In 1954, Westfield dispatches Ben to Indo-China, where he observes French Union deployments and writes a report that never sees daylight. Nine years later, President Kennedy calls Westfield out of retirement and sends him, Ben and a handful of others to South Vietnam on a similar errand that costs the general his life. JFK, shortly before his assassination, adds Ben’s name to the list of colonels to be promoted to flag rank.

But the battles in Vietnam are not the only ones General Moore must fight. Journalist Arthur Kahn, a longtime friend, insinuates that Ben committed mutiny during the Korean War. His and Susan’s son Travis is killed while leading a campus peace march. Bereaved of their only child, Susan Moore turns her back on her husband. Ben’s closest comrades fall in battle. He narrowly avoids a court-martial for a disputed action during the Tet Offensive.

Alone, ravaged by loss, grief, sorrow and guilt, he gravitates toward the only person left alive who knows and loves him: Laurel Sitwell Irving, his high school sweetheart. But the solace she supplies is fleeting, and soon, he is unable to live with himself. His friends are still dead, and he still has a wife. And he still loves her.

After his retirement in 1973, Laurel resurfaces to confess that she was carrying Ben’s baby when she fled their hometown twenty-five years earlier. Having finally and completely made a home and a peaceable life with Susan, civilian Ben Moore must go to Israel to find Rebekah Claire Irving, the daughter he never even knew he had. When the Syrian surprise attack starts the Yom Kippur War, he is forced by circumstances to assume his last command.

ANOTHER SUCH VICTORY: An American Fable by James Harriss is the story of our yesterdays, a story for everyone who struggles to reconcile what never was, with what might have been and to come to terms with what is. 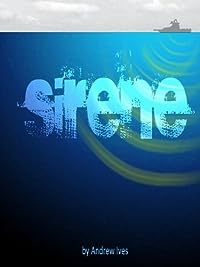 In the spring of 2014, a French private investigator follows the trail of a marine scientist who disappears on his way to Italy. Several other mysterious environmental happenings occur around the same time, but is this more than coincidental? In Sirene, we follow events through the eyes of the investigator’s unhelpful girlfriend who tags along for the ride. 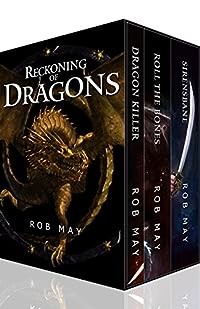 Reckoning of Dragons: Dragon Killer, Roll the Bones & Sirensbane
by Rob May

The complete epic fantasy trilogy. In a world fearfully awaiting the return of the dormant dragon god, a triumvirate of evil villains rises up to take advantage of the chaos. Reluctantly pitted against them is Kal Moonheart, an adventurer and gambler, marked for a life of danger at a young age. But Kal has friends to stand with her: honest thief Will Straightarrow, smuggler and pirate Lula Pearl, knight-errant Rafe Firehand, and wily politician Benedict Godsword.

Kal’s quest for peace will take her from the tallest mountains to the deepest seas, from the darkest dungeons to the highest halls of power. All the traditional fantasy elements are here, but with the added suspense and unpredictable plots of a thriller. There will be blood. There will be a reckoning…

In DRAGON KILLER, a mysterious threat puts Kal on a collision course with terrors she thought were long buried in her past. Teaming up with a young guard captain, aspiring knight Rafe Firehand, she travels to a dragon-haunted island to hunt down a murderous beast. But once there, Kal soon discovers there are worse things in the world than dragons, and when an unexpected sequence of events leaves her in an impossible situation, she must summon every ounce of skill, cunning and strength in order to survive.

In ROLL THE BONES, the fate of a city rests in Kal’s hands. An immortal killer stalks the streets of Amaranthium, leaving a trail of mutilated corpses in its wake. A week before the summer elections, Kal is called before a clandestine gathering of the city’s elite, and charged with ending the murders before a terrible secret can come to light — one that threatens to shake the Republic by its very foundations. As Kal hunts the killer, her courage, loyalties and heart are put to the test, and she must decide if she can trust even her closest friends.

In SIRENSBANE, Kal faces her greatest challenge yet. On a freezing winter night, Kal is dragged from her bed by a friend in need. Renowned pirate and smuggler Lula Pearl has been struck with a fearsome curse, and Kal must join her and set sail on a dangerous voyage. On the other side of the world, the Auspice Islands have been overrun by a horde of evil creatures, led by a man whose terrifying schemes threaten all life both under and above the waves — the almighty sorcerer known as Corus Sirensbane.

In FIRST CUT, a young Kal Moonheart yearns for adventure. But will her first mission make her… or break her?

In THE FATEFUL FLAME, discover what became of Kal’s young love, Deros, on the day the dragon destroyed their future. 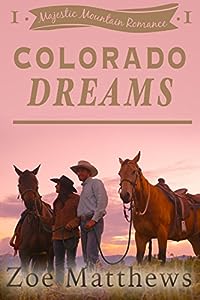 Introducing the first of a six-part western romance series about six siblings who work together to turn their family cattle ranch into a dude ranch that is located deep in the Rocky Mountains in Colorado. They each choose a job that they are interested in, and along the way, they each find love and romance.

Sierra has been a widow for two years. She has been busy raising her twin daughters on the family ranch when her father is killed.

As their family attorney reads her father’s will, she learns that each member will receive a large inheritance, but there is a catch. All six of them must reside on the ranch for a period of six months, together, in order to receive it.

Logan, also a widower, has been hired to help with the horses and he brings along his own little family.

Can Sierra and Logan learn to create a new family of their own and find love for each other along the way?

If you love clean inspirational westerns, then Colorado Dreams, the first book in the Majestic Mountain Ranch Series, is for you! 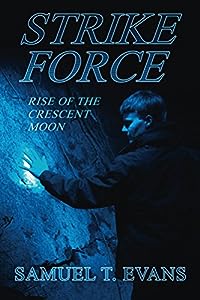 An explosion threw John off his feet. As he looked up, a bolt of energy hit him, and his body twisted as his muscles tightened up in a spasm of pain. John’s head started to spin and he felt himself falling forward. As he hit the floor, he rolled over, gasping for breath. He saw a flash of movement, then suddenly a second burst of light. Someone fell heavily on top of him, knocking the wind out of him.
As the darkness closed in around him, John tried to move, but it felt like his muscles wouldn’t respond. Was he dying? Why wasn’t he able to move? He could hear someone yell his name, but he couldn’t reply. The voice faded and mixed with the deep blackness that was smothering him