This exciting, edge of your seat thrilling collection from author M. Black is filled with haunting questions of consciousness and artificial intelligence, identity and self-awareness, politics and love, life and death, the reader will be engaged in entertaining stories filled with futuristic technology. Enjoy! 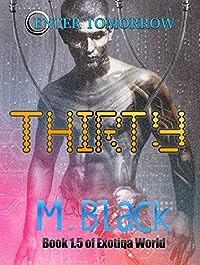 THIRTY is a novelette prequel to EXOTIQA and will appeal to a vast array of audiences. This is 1.5 in the Exotiqa World, prequel to the first release, and can be read before or after EXOTIQA. Thirty can also be read as a standalone.

Following the actions of Thirty — the love interest of Maci from Exotiqa — the reader will catch a glimpse of what life was like inside of the ImaTech factory for Flexes and how he fell in love with Maci.

Fans of Configured, Freelancer, Blade Runner, Divergent, iRobot, The Glitch, and robot cyberpunk dystopia will love this world with two young but strong female heroines who must save the fragile system crumbling around them. This story will even satisfy those looking for something with more philosophical themes and is a perfect fit for the sci-fi, artificial intelligence, and robotics interested readers. 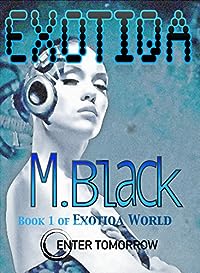 “Dense forest everywhere. Visibility unclear. I blink — at least, I think this is what humans call blinking. My eyes never have to close, except to keep debris out and to go into maximum memory mode. My lids shut quickly and open with a shuttered click. I run — Am I panting? — but to where, I do not know. I only know I have to get away, far away from ImaTech and Machine BC001230M2054C.”

Set in the robot cyberpunk year 2055 in British Columbia, Canada, where humans are part robotic and robots are becoming more humanlike, the line dividing the two is becoming less clear. When the nation is controlled by a popular online program, those that deviate risk their lives. But that never stopped Fione.

When sixteen-year-old Fione meets Maci, a twenty-one-year-old Flexbot who escapes from ImaTech located along the crust of the Coast Mountains, Fione’s life is taken on a roller-coaster ride of events that begins with trying to save Maci from ImaTech Corporation and ends with trying to save the country. With Fione’s best friend and love interest, a Flexbot named Pix, Fione and Maci must come face-to-face with the greatest dangers their country has ever seen and learn the disturbing secrets of the popular online program Exotiqa — which her friends, family, and most of the country has downloaded onto their Cerebral Slabs. This won’t be easy, since Maci’s only love and greatest enemy, nicknamed Thirty, is tracking her every move.

This robot cyberpunk will appeal to fans of Divergent, Configured, Freelancer, iRobot, The Glitch, Blade Runner, artificial intelligence, robotics, and futuristic technology will enjoy this story about two young, but strong female heroines who must save the fragile system crumbling around them.

Elon Musk announced the NUERAL LACE, a real life interface for the brain, designed by Telsa and SpaceX. My book was written in 2015, released in 2017. My interface is the SLAB. EXOTIQA is the program downloaded into the SLAB. Real life and my fiction are eerily similar! 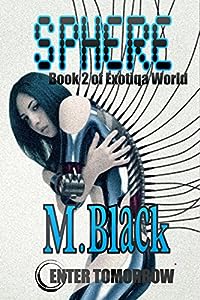 With machine advancements embedded within human bodies, the questions of social inequality and prejudice come to light in this robot cyberpunk.

A year after the events of Exotiqa, Fione and Maci, are now facing ImaTech’s latest threat, the Humanbot program. Under the careful eye of Russell Wagner, this won’t be easy.

With Sector Spheres keeping watch on Fione and her best friend Spear joining the rebellious Vigilante group, Fione has to trust Pix more than ever. But is his allegiance to the human race the same as hers?

Meanwhile, Maci is happy to have Thirty back in her arms, but she has struggles of her own trying to keep off the radar of the Flexbot Recycling Centers that want to destroy any conscious Flex, and while she relies on Thirty for survival she has doubts of her own about his loyalty.

In this original series, we watch humans lose their humanity as they become more robotic, and robots become more humanlike with a sense of love and compassion.

Told from two points of view: Maci’s and Fione’s, the reader will gain a better sense of what life might be like inside of a sentient machine’s brain from Maci, and from Fione learn more about the ‘transportation problem’ and how human consciousness might work inside of a machine if one day we ever arrive at that technology.

Fans of Divergent, Configured, The Glitch, Blade Runner, iRobot, and A.I. will love this robot cyberpunk dystopian world with two young but strong female heroines who must save the fragile system crumbling around them. This story will even satisfy those looking for something with more philosophical themes and it is a perfect fit for readers interested in sci-fi, artificial intelligence, and robotics. 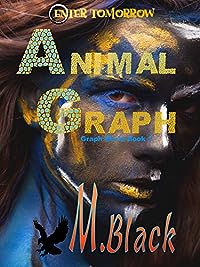 Animal Graph is a YA Amazonian Eco-Fic Dystopia and is the third story from dystopian author M. Black (Simulation, Exotiqa, Animal Graph). Her novels are branded Enter Tomorrow with a focus on robots, artificial intelligence, simulations, wildlife, grafting, cloning, illusions, or futuristic technology.

This novel came to her in a dream.

Set in the Amazonian jungles of South America, M.Black weaves an action-packed tale in this original YA Amazonian Eco-Fic Dystopia set forty-two years after a nuclear war. Jin — a prisoner of King Borran — and Adan — another Graphed — have to fight for their survival in a utopia gone wrong. In a world where animal cells and neural tissue have been grafted into humans, and humans are connected by brain waves to chosen animals from the Amazon, will Jin and Adan survive? Will they ever find their Animal Graph counterparts? Can the Earth find harmony with humanity and the animals or will those wanting to destroy it all win?

Socially relevant, dark and sexy, with themes that hang on environmental concerns and animal welfare… ENTER TOMORROW with ANIMAL GRAPH. A novel along the lines of Hunger Games meets X-Men. If you’re a fan of The Treemakers, The Sowing, Simulation, Age of Order, A Brave New World or A Canticle for Leibowitz, you may also enjoy this novel.

Excerpt:
“Block D, Cell 47; D47 was my designation. Hadn’t heard my real name — Jin Maharaj — in a year. Even my cellmate referred to me as D47. By cellmate, I mean he shared the concrete cell next to me and we could speak only through a barred opening between us, the size of my hand. We all got used to calling each other numbers. When they first took me, I’d sit in my cell for hours daydreaming about my family, about Lila — our good family friend. She was married to a medicine man and tried to help Papa and my sister May when they got sick. I’d remember her words of encouragement, ‘Nature has all the answers. Stick to nature.’ But I’d always be interrupted by our mandated chores: washing clothes, floors, toilets, gardening, or working in the shops to make rubber. Slop three times a day was pushed under the cell door to keep us alive for all the work.” 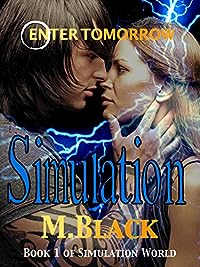 Excerpt:
“No one is getting in but whom we allow, and no one is ever getting out.” -The Chancellor

“You live in your perfect princess castle, with three meals a day, and everyone at your beck and call. Safe from danger, and from the truth.” His head lowers, and he looks like he is about to cry, before he takes a deep breath and his head rises. “I won’t be able to enlighten you with anything but misery. I’m not a Giver. I’m a survivor.” -Jez

“Survivor of what?” I ask, not sure if he even heard me ask the question, because at that moment the dark-skinned man with the buffalo tattoo pushes beside Jez and tugs on his shoulder.” -Ilia

Along the lines of City of Ember meets CW’s The 100, this story will capture your heart and still won’t let go… even at the end. Written in part while listening to Outside by Ellie Goulding, this story contrasts technology to nature, rich to poor, privilege to hardship, lies to truth, and illusion to reality.

Set in 2175 in Colorado, USA, where Citigogs are the new form of cities and citizens are kept under a careful population control, we meet Ilia the Princess of our main Citigog named Iliad, and Jez a Giver. As Ilia spends more time with Jez, she finds herself drawn to the Outside and ventures out of her Citigog only to learn that everything is not what it seems.

Fans of CW’s The 100, City of Ember, Breathe, The Water Knife, Oryx and Crake, and the Windup Girl will revel in this YA SIM Cli-fic Dystopian story about a strong, but disillusioned heroine who must become brave as she uncovers the truth about her world.

Join Ilia and Jez, on this amazing and unforgettable journey!