While it’s horrible that my poor sweet Junebug is in the hospital recovering from surgery, I find myself with a freedom I have missed for a month or so. Without having to keep an eye on her with potty training and just general puppy duties, I have time to get stuff done that I have neglected. I have been going at full speed knowing that this freedom is only for a very short while and I better take full advantage. There is a real possibility that I will decorate for Halloween and Christmas both. The fake blood is blending in too well with Santa’s coat. This will be more difficult than I thought. MAKE IT WORK WOMAN!! 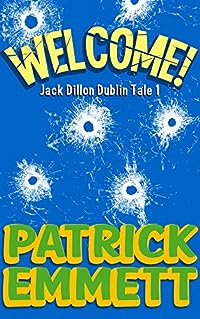 MARSHAL DILLON RIDES INTO DUBLIN… And the bad guy population starts dropping. But maybe you’d better hide your women.WELCOME! is the first tale in the humorous, rollicking series of Dublin tales featuring dashing detective Jack “Dildo” Dillon by Patrick Emmett, the appropriately Irish pseudonym of Mike Faricy. Jack’s no less libidinous than Faricy’s popular Dev Haskell, but he’s a bit more mature, and way better with a gun. Think action-packed: Marshal Dillon Rides Into Dublin.Jack’s a U.S. Marshal in Dublin, escorting a fugitive named Daniel Ackerman and having a wonderful time–at first. All goes smoothly and he’s had a splendid tour of the fair city in the company of Garda (Officer) Ann Dumphy, the lovely colleen assigned to mind him, up until the transfer of the prisoner at the airport. It seems Ackerman’s Russian partner would prefer that Ackerman not stand trial in the U.S., and sends a team of his thugs to prevent it. Suddenly Marshal Dillon finds himself in a very wrong place at a very wrong time. He ends up in hot water with the American Embassy for carrying a gun in Dublin, but the Irish authorities might just have a little different take on things… 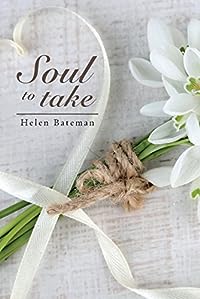 Soul to take
by Helen Bateman

Vicky is desperate to make her mark, in a world which just doesn’t seem to notice her.

Silence and smiles hide the pain that Nell is keeping to herself.

Sarah’s dreams of having a family seem hopeless.

And then there’s Shannon, who’s in trouble at school yet again.

But what these four women don’t know is that someone – or something – is watching them.

A much-recycled soul, suspended between one life and the next, realises that Vicky, Nell, Sarah and Shannon are embarking on their journey towards Motherhood. As memories from past incarnations return to this Soul, it becomes clear that one of these women will be chosen to guide it once more.

Soul to take explores what it is to become a parent and considers the possibility that actually, our children are the ones who carefully select us. 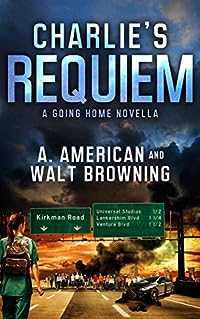 Charlie is good at her work. As a hard charging drug rep with the brains and talent to make it to the top, she has the world at her feet. Then, the lights went out, and everything changed. An E.M.P. decimates the United States, leaving the country in the dark. With modern technology suddenly and permanently turned off, society’s dark side quickly takes over. Caught on the road, she teams up with two new companions and they fight their way towards safety and freedom. Criminals, gangs and worse stand between them and the safety of a friend’s farm.

A Going Home Novella based on the best-selling series by A. American, Charlie and her two companions must find a way out of the big city, or die trying. 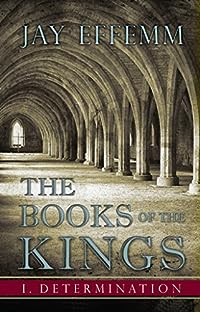 The Books of the Kings: I. Determination
by Jay Effemm

King Hhalon of Genan is furious. Not only is his son Hhamen dallying with Dena, a merchant’s daughter, but the young fool has fallen in love with her. This cannot be allowed to continue.

Hhalon’s anger only increases when he discovers that Dena’s father dares to decorate his home with precious white gold. Under Genan law, white gold is strictly reserved for the king himself.

The king’s rage sets in motion events that will shake the kingdom to its core. A rash decision to exile two powerful earls in order to colonize new land triggers rebellion… as yet hidden, but growing ever stronger. Meanwhile, a prince will abandon royal responsibilities for love, while savage forces in the kingdom prepare for war — and priests and spymasters vie for influence over a kingdom.

The Books of the Kings expertly combines fantasy with the complex cultural and political structures of medieval Europe. Comparable to the series A Song of Ice and Fire in its breathtaking scope, Jay Effemm’s sprawling epic merges the stories of six memorable characters into a cohesive, action-filled drama. 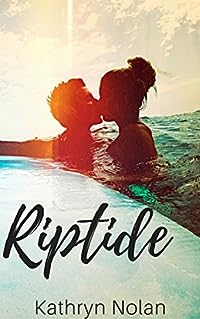 Avery Dacosta never expected to find a protester in front of her office.

Especially not now, when she’s this close to achieving a professional milestone years in the making: building a luxury hotel on Playa Vieja, San Diego’s untouched beach paradise.

Finn Travis, local surfer and all-around nice guy, never expected to find himself the leader of Playa Vieja’s resistance. He’s more of a mellow tree-hugger than a radical activist. Except Avery’s hotel threatens to destroy the place he loves the most. For the first time in his life, Finn decides to use his charisma for more than just attracting his next fling.

Avery’s worked too hard to let a bongo-playing hippie like Finn shatter her perfect future. And his naive idealism grates on her every nerve.

She’s not alone in her loathing: Finn thinks Avery is a greedy, corporate robot.

As Avery and Finn crash together like waves against the shore, their debates become heated. Sexy. Dirty.

But the riptide of their attraction jeopardizes more than just their ideological values. Can Avery and Finn be together without giving up what they care about the most?