Author Edward W. Robertson’s books have sold over 500,000 copies, twice hit the USA Today bestseller lists, been nominated for an Audie for best audiobook, and have stuck in Audible’s top 100 for over six months. Before that, he worked in a bookstore. Before that, he was a pile of carbon, hydrogen, and oxygen waiting to be assembled into a conscious being. 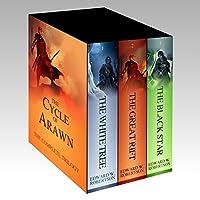 The Cycle of Arawn: The Complete Trilogy
by Edward W. Robertson

Dante Galand is young. Penniless. Alone. But devoted to learning the dark magic of his world.

His quest will take him from the city gutters to a foreign land of sorcerers. To a war for independence. And finally, to another war–this time, for his people’s very survival.

A USA Today bestselling series, THE CYCLE OF ARAWN is a complete trilogy of 1600 pages–over half a million words of strife, civil war, friendships made and broken, and one man’s obsession to become the greatest sorcerer since the days of the gods. 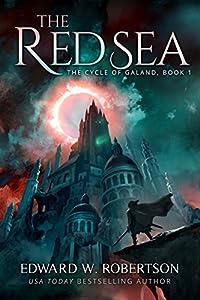 The Red Sea (The Cycle of Galand Book 1)
by Edward W. Robertson

When Dante Galand was just a boy, his father Larsin sailed away to make his fortune. And never returned. Since then, Dante has become a great sorcerer. A ruler. A destroyer of kings. And he’s just learned that his father is living on a forbidden island at the edge of the known world.

Where he’s dying of a mysterious plague.

In the company of his friend, the swordsman Blays, Dante travels to the island. There, his magic can do nothing for his father. As Dante and Blays quest for a cure–beset by strange beasts, angry spirits, and violent coastal raiders known as the Tauren–Dante falls sick, too.

To save his father and himself, he’ll have to rediscover the island’s long-lost magic. But the hunt for its secrets leads Dante on a crash course with the Tauren–and island-wide civil war.

And as he’s away, an old threat begins to move against his homeland.

Set in a USA Today-bestselling world, THE RED SEA is the first book in a tale of warfare, sorcery, and friendship through the darkest times. 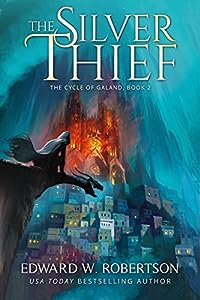 The Silver Thief (The Cycle of Galand Book 2)
by Edward W. Robertson

Dante Galand has cured the sickness that trapped him on the Plagued Islands. Now, it’s time to leave.

And kill a priest.

The target is Gladdic of Bressel. Gladdic, who executed Dante’s friend, the pirate Captain Twill. Who all but enslaved the Plagued Islands. And whose visions of empire are far from over. But Gladdic is trained in both ether and nether — and a darker magic than Dante has ever known.

He’s the most dangerous foe Dante has faced. And if Dante falls, so will an entire kingdom.

Set in a USA TODAY bestselling world, THE SILVER THIEF is the second book in the Cycle of Galand. 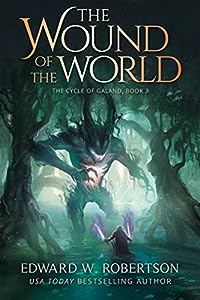 The Wound of the World (The Cycle of Galand Book 3)
by Edward W. Robertson

Dante and Blays have forced Gladdic from the Collen Basin. But the victory might only be the first battle in a much larger war. With the land on the brink of starvation and politically fractured, Dante and Blays scramble to secure Collen’s food, borders, and allies. Before their work is done, rumor arrives from Mallon. The enemy is mustering for another attack.

Even if Collen can weather the coming storm, there’s no guarantee their independence will last out the year. During a border raid, Dante learns Gladdic has fled to the shadowy realm of Tanar Atain, home of the Andrac.

And the secrets Gladdic returns with could tip the balance of power forever. 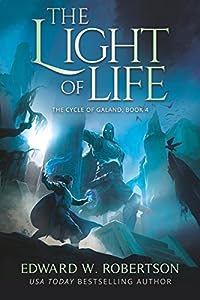 The Light of Life (The Cycle of Galand Book 4)
by Edward W. Robertson

After a year of fighting across three different lands, Dante and Blays have finally brought Gladdic to justice — and in the process, they’ve unleashed a horror beyond all reckoning.

The enemy is known as the White Lich. He is ancient. He is immensely powerful. And Gladdic believes he will soon enslave all of Tanar Atain.

Their only chance to defeat him is to strike fast, before the lich has regained his power. But attacking him directly would be suicide. Instead, Gladdic has an alternative. Once upon a time, the lich was human, with a mortal body. Gladdic believes that original body is still out there, hidden somewhere in the swamps.

If they can find it and kill it, then the lich should die with it. But if they fail, the White Lich will rip the souls from the people of Tanar Atain — and turn his gaze on the rest of the world.