Blood and Roses by author Jordan Petrarca, with it’s many twist and turns, will keep you guessing from page one. The wonderful use of technology, including flying cars, adds even more to the fantastic quality of the story. Enjoy! 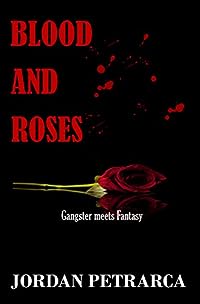 Blood and Roses
by Jordan Petrarca

Seven organized crime Families, known as the Seven Blessed Families, rule the World of Exodus and its people with the use of their mysterious magical artifacts, called Relics. Relics give powers to the Blessed members of the Families, and they use those powers for corruption and control of everything in Exodus.

Maretto Rose, the patriarch of the Rose Family, celebrates his 50th birthday by attending a performance at the Grand Theater with three of his four sons. The theater is attacked by the heir of the Cicello Family, Zasso Cicello. His mission is to abduct Maretto, but it fails when Maretto’s son, Georgiano, fights Zasso to protect his father and family. Georgiano is ultimately slain and Zasso flees and goes into hiding. Now, the Rose Family must find where Zasso is hiding. They want answers. Who gave him the order for the attack, and what do they want with Maretto Rose? And most of all, they want revenge… But who could it be? A leader of a rival Family? Or someone or something else more powerful than they could imagine?

Meanwhile, Maretto’s youngest son, Ric, must battle his demons and addictions in order to become a Blessed member of the Family and become the man he was destined to be, before he ends up being another dead junky on the street.
So, sit back and enjoy the ride, because in Exodus, gangsters make the world go round.