Who Is The We?

My partner in crime and her family have gone off to Canton, Ohio to compete in the inaugural Pro Football Hall of Fame National Youth Championships (Whoa.. I actually had to take a breath after saying all of that). She is going to be gone a week. Without my best bud here, there is so much that can go wrong. She is the one who keeps me sane and from getting arrested for doing stupid stuff. It would not be completely out of the question that I might get loose and run around the neighborhood in my bathrobe screaming something about a rare Pokemon that just popped up. When your with a friend, that’s normal. Maybe even a little funny. But a person alone doing that is just unsettling.  (whispering to myself) Keep It together..keep it together. We got this! Wait! Whose “We”? 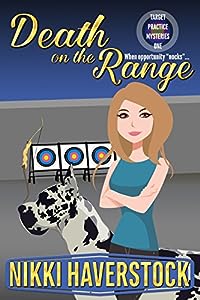 Death on the Range: Target Practice Mysteries 1
by Nikki Haverstock

When a competitive archer is murdered at the training facility where Di has just started working, she’s thrust into the middle of an unofficial investigation before she can even settle into her new life.
With her roommate Mary and a Great Dane named Moo, she begins to unravel the mystery around the death of the victim, but can they solve the case before they find themselves in the killer’s sights?
A humorous cozy murder for every sleuth in the family

This is the first book in a brand-new series set at the fictional Westmound Center for Competitive Shooting Sports in rural Wyoming. 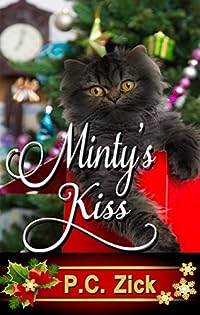 When Molly retreats to North Carolina with Gracie, her ten-year-old daughter, she’s surprised to find her childhood crush, Nick, still living in the area. Months before her retreat, Molly’s husband announces he’s leaving to sail around the world with his best friend. She divorces him and takes Gracie and Harold, her seventeen-year-old cat, to the Smoky Mountains where she spent many happy childhood vacations.
The morning after her arrival, Nick shows up on her porch, and he is even more handsome than she remembered. She feels the flush of her adolescent crush heating up. But first, they must find Harold after he runs out the cabin door and into the woods.

When Nick discovers Harold lying dead at the base of the tree where Molly always went to read as a child, they bury him. A broken-hearted Gracie and Molly return to the cabin and discover a gray furry kitty under the porch. Gracie names him Minty

Gracie refuses to believe her father won’t come back for them, so she resents Nick spending time with her mother and tries her best to pull them apart. Can a small kitty named Minty help Gracie accept the love developing between Nick and Molly in time for her first Christmas in the mountains of North Carolina?

Minty’s Kiss is a sweet romantic novella, filled with holiday cheer brought to life by an adorable kitten. 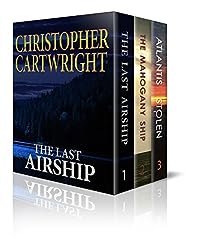 In 1939 a secret airship departed Nazi Germany in the dark of night filled with some of the most influential people of its time.

Its cargo: a complement of rich Jewish families carrying their most valuable possessions. One such item amongst them was as dangerous as it was priceless.

The airship never reached its destination.

In 2015 Sam Reilly, a marine biologist and wealthy son of shipping mogul James Reilly discovers a missing clue about the lost airship and what follows is a violent treasure hunt, kept secret by the most powerful men in the world today, driven by their greed and need for that which all are motivated: the opportunity for unlimited power.

A pyramid half a mile below the sea.

And a puzzle that must be solved before it destroys the human race.

On the 18th of February, 1812, the Emily Rose became shipwrecked on the southern coast of Australia. The survivors are forced to walk nearly a thousand miles through the unexplored land to reach the only settlement, Sydney Cove.

Nearly two hundred miles inland, they come across the remains of a monstrous ship, far bigger than anything the British Navy had ever constructed. Through basic communication achieved with the natives, they learned that the ship had been there for a very long time… Maybe a thousand years? Despite the details of the mysterious ship in the journals from the survivors of the Emily Rose, no evidence that the Mahogany Ship ever existed was found – until now.

Present day: A mining exploration in Australia takes a core sample 500 feet below the surface of a deserted mountain. The sample returns no evidence of gold deposits, but something much more valuable – a single Spanish Gold coin, dated 1518. Could the origins of this coin finally reveal the existence of the fabled Mahogany Ship?

At the same time, Sam Reilly and his team of ocean investigators are exploring the cause of a widespread death of sea life within the Gulf of Mexico. In a race against time to stop the irrevocable destruction of the world’s marine life, the two mysteries may just be entangled, and failure to solve them both will result in the greatest threat to ever face the human race.

A civilization stolen from the history books.

A billionaire’s obsession to unlock its secrets.

A brotherhood determined to hide the truth.

And time is running out.

Only a handful of people know what destroyed the ancient Atlanteans, whose very existence is a secret that they will kill to protect. Unfortunately, the very same catastrophe that destroyed that once proud civilization is drawing near once more.

The question is, can marine biologist Sam Reilly discover the truth in time to prevent it? 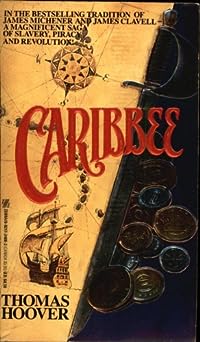 Barbados and Jamaica 1648. The lush and deadly Caribbean paradise, domain of rebels and slaveholders, of bawds and buccaneers. Colonists fight a wishful war for freedom against England.

CARIBBEE is the untold story of the first American revolution, as English colonists pen a Declaration of Defiance (“liberty” or “death”) against Parliament and fight a full-scale war for freedom against an English fleet — with cannon, militia, many lives lost — over a century before 1776.

The powerful story line, based on actual events, also puts the reader in the midst of the first major English slave auction in the Americas, and the first slave revolt. We see how plantation slavery was introduced into the English colonies, setting a cruel model for North America a few decades later, and we experience what it was like to be a West African ripped from a rich culture and forced to slave in the fields of the New World. We also see the unleashed greed of the early Puritans, who burned unruly slaves alive, a far different truth from that presented in sanitized history books. Finally, we witness how slavery contributed to the failure of the first American revolution, as well as to the destruction of England’s hope for a vast New World empire.

We also are present at the birth of the buccaneers, one-time cattle hunters who banded together to revenge a bloody Spanish attack on their home, and soon became the most feared marauders in the New World. The story is mythic in scope, with the main participants being classic American archetypes — a retelling of the great American quest for freedom and honor. The major characters are based on real individuals, men and women who came West to the New World to seek fortune and personal dignity. 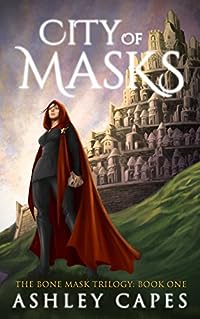 An epic fantasy adventure in a world of cold steel and awe-inspiring magic!

Waking in Anaskar Prison, covered in blood and accused of murder, nobody will listen to Notch’s claims of innocence until he meets the future Protector of the Monarchy, Sofia Falco.

But Sofia has her own burdens. The first female Protector in a hundred years, her House is under threat from enemies within, the prince has made it clear he does not want her services and worst of all, she cannot communicate with her father’s sentient mask of bone, the centuries-old Argeon. Without the bone mask she cannot help anyone — not herself, and certainly not a mercenary with no powerful House to protect him.

Meanwhile, far across the western desert, Ain, a young Pathfinder, is thrust into the role of Seeker. Before winter storms close the way, he must leave his home on a quest to locate the Sea Shrine and take revenge on the people who drove his ancestors from Anaskar, the city ruled by the prince Sofia and Notch are sworn to protect, whether he wants their help or not. 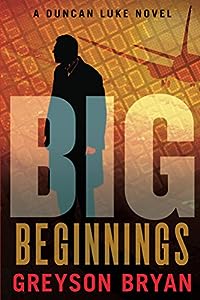 Duncan Luke is no stranger to impossible situations. A high-priced lawyer and expert in business intelligence, he knows how to extricate his clients from sticky situations while saving–or making–them millions. To be the best, he’s sacrificed everything, including his family, but now he wants out. He’s quitting his lucrative practice for academia and time with his autistic son, Sam. But his wife isn’t on board and files for divorce, forcing him to fight for custody. With mounting legal bills, the only way to keep his son is to take on one last client. He plans to do the job, get out and get home to Sam, but his client, Ghislaine Bingham, has other ideas.

Ghislaine has a crisis of her own. Her cheating husband died and left her in a turf war with her stepson over the family business, Bingham Investment Group. She stands to lose more than money. Her reputation and life’s work are tied up in the company. Her self-worth is on the line and only Duncan has the expertise to see her to victory.

When Duncan and Ghislaine meet, sparks fly, but neither can walk away. Ghislaine sends Duncan to Tokyo to convince his old friend, Taro Takayama, that Ghislaine is the best person to run Bingham. But Taka first needs Duncan to fix his Panama problems. Duncan races to Panama where he is kidnapped and beaten, stumbles into a sex-trafficking ring and rescues a beautiful woman. Unaware of the danger in Panama City and frustrated by Duncan’s unorthodox ideas, Ghislaine threatens to pull him off the job.

From L.A.’s towering palms and Tokyo’s steamy noodle bars to London high-finance and Panamanian corruption, BIG:BEGINNINGS is a thrilling, non-stop ride around the globe. As Duncan flies across time zones doing battle for Ghislaine, risking his life and reputation, Sam slips further away. Duncan must finish the job to get Sam back, but time is running out.