Magic and mystery. Witches and demons. Dragonborn and goddesses. Forces of power clash, threatening worlds, and destroying lives. Heroes and heroines must step up to the challenge to save the gifted and mundane alike. Enjoy! 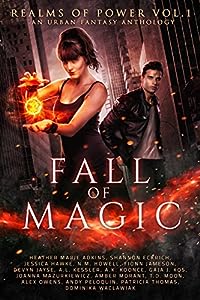 Readers who love The Dresden Files and The Hollows will revel in the tension and imagination in Fall of Magic.

Stories in Fall of Magic

BURN by Shannon Eckrich
Even water burns if the fire is hot enough…
A SPARK IN SHADOW by Jessica Hawke
In a world shattered by black magic, a young witch must battle powerful demonic forces to rescue an innocent woman and her child.

THE GIRL IN THE FOREST by Fionn Jameson
A girl in a red cloak has been sighted in the forest. Her appearance might be anything but benign.

GHOSTLY MAGIC by Devyn Jayse
A sudden request from a customer results in an unusual discovery.

NOT ALIENS by A.L. Kessler
Little green men would have been easier to deal with.

THE SIXTH WITCH by A.K. Koonce
The descendants of magic have awoken a curse and now they must break it before it consumes them…
DESTINY RECLAIMED by Gaja J. Kos
What doesn’t kill you leaves a demon fighting by your side.

TWISTED FATE by Joanna Mazurkiewicz
Will Fran save the life of her beloved friend Dara or fails and loses everything that she ever cared for?

TO KILL A GOD by Amber Morant
Seraph’s only job is to kill the avatar of gods, but life isn’t that simple when you go to a country where the people want to kill you too.

ECHOES OF A WARLOCK by T.D. Moon
What would you risk for your best friend?

HELL HATH NO FAIRY by Alex Owens
A Vampire with questionable morals and a heart of Gold. A missing Fairy Princess. And a mission that could end them both.

THE FORGOTTEN CHILDREN by Andy Peloquin
Nowhere Is Safe

THE MASK OF WINTER’S MAGIC by Dominika Waclawiak
Winter holds Kali prisoner, and before now, she didn’t even know it… 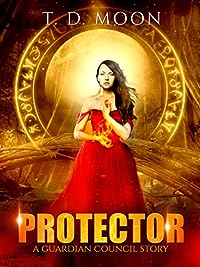 Newly minted Protector Daria Rosewood is thrilled to finally receive her first mission. Deployed to Earth, she teams up with Dr. Drake Jones to hunt for a missing woman in Seattle’s paranormal underworld.

It’s time to prove to everyone that she can uphold her family’s legacy and the proud tradition of Protectors. Expecting a simple investigation, she gets a whole lot more than she bargained for.

Daria quickly finds her skills, magic and mental fortitude stretched to their limits. A harsh new truth becomes apparent. The honor of a lifetime sometimes demands a steep price.