The True Price To Pay

This collection by New York Times and USA Today bestselling author Thea Atkinson, is filled action-packed stories with not-so-shrinking heroines that are not always the good guy. You won’t want to miss these awesome stories. Enjoy! Readers 18+ 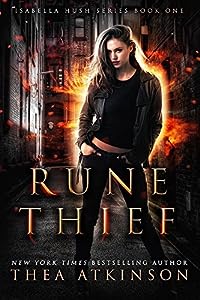 What she steals may be priceless, but what she can’t see will cost her.
Isabella Hush may be a talented thief, but her past is about to creep up on her.

In need of quick funds to escape a nasty ex and his henchmen, she takes a chance on a rumored cache of Incan gold. But the heist goes terribly wrong and she ends up inebriated in a dark alley with a strange man dying at her feet.

Against her better judgement, she pauses to help, and out of habit, picks his pockets. Before long, she discovers there’s a supernatural realm seething unknown beneath her feet. And she just might long for the simple days of a heist gone bad…

Half a Huntress (Rogue Huntress Chronicles Book 0)
by Thea Atkinson

She thought no man could tame her. She was wrong.

Shana is is the assassin responsible for keeping her pack safe, but it’s her family she’ll die for.

Amid a stream of attacks on her pack, Shana is led to a dark alley to root out the cause and neutralize it. Weary and rushed, she makes a cardinal mistake: she lets a mortal man live.

It’s only when she returns home to report to her alpha that she discovers the truth. That the stranger is involved in a coup to take over the pack and his soldiers have taken control of the compound. Worse yet, the threat she worked so hard to avoid has finally come… and it’s from within.

Now her entire pack is in danger and it’s all her fault.

The trouble is, she’s not the submissive type.

Half a Huntress is the opening story of the tantalizing new urban fantasy series The Rogue Huntress Chronicles. If you enjoy heroines who are far from wilting flowers, you’ll devour Half a Huntress. 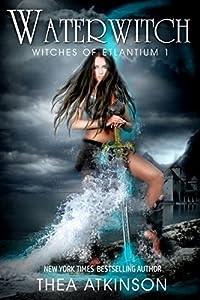 In a world where love is a thing to kill for, can she find a love to die for?
Alaysha is the only witch of her kind. With a power that allows her to drain the living fluid from a man in a single breath, she is feared and hated in her own tribe because she can’t control her magic.

Her war-mongering father uses her as a weapon to control his enemies. Her mother is nothing but a distant memory. She is jaded and weary and waits for that one time she can be something more than an outcast.

Then she is ordered to unleash her magic on an entire tribe. She obeys because she always obeys. She knows they are innocent. She knows no one has ever escaped her magic alive. But

Except this time someone does escape. And what should have been complete annihilation turns out to be a mission of mercy.

Now it’s not enough to find acceptance through obedience. It isn’t enough to accept a life where she is exploited. She wants more. She deserves more.

She wants to know who she really is and where she came from. And she will uncover the truth of her past even if she must trust a handsome stranger who seems to know too much. Even if she has to stand against the very men who exploit her for their own greedy means.

Even if her new-found independence changes everything she ever believed. 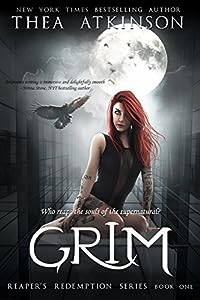 A new, smoking good urban fantasy series from the bestselling author of Water Witch
Who reaps the souls of the Supernatural?

Ayla doesn’t believe in monsters. There are only bad people with bad intentions. But she does believe in helping someone in need. So when a text from a long lost friend flickers across her cell phone, asking to meet at the abandoned Gothic cathedral downtown, she can’t resist answering the call.

Except her friend isn’t there when she arrives. Instead there’s a tattooed maniac bent on making her his next victim.

That’s when Ayla discovers that not only is she surrounded by monsters, but she is actually one of them.

Grim is the first installment of the hot new Reaper’s Redemption series, an urban fantasy collection with supernatural creatures of all kinds and an unexpected love triangle. If you enjoy clean but romantic stories with supernatural beings and heroes in unexpected places, you will want to pick up your copy of grim.

PICK IT UP today and find out f you believe in monsters. 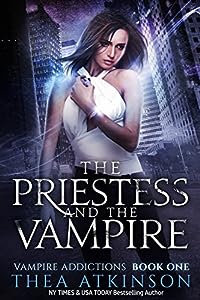 Jade begins Halloween night as a voodoo priestess, but the upscale costume party quickly turns into a date with death.
And the vampire beside her isn’t even the worst of her troubles.

Turns out the vampire is real and her hot date has taken advantage of her vulnerability to serve her up as an entree. His selfish desire to earn points toward his own immortality has left her sagging nearly lifeless beneath his master’s bite.

She’s not sure the broad-shouldered Viking who comes to her aid is what he seems either. And the costume she rented from a sketchy shop comes complete with a spell that helps a real voodoo priestess revive her dead lover.

Now Jade’s life really starts to suck, and it seems her only salvation is another magnificently hot vampire who makes her an offer she can’t refuse.

The Priestess and the Vampire is the first installment of the urban fantasy series Vampire Addictions. If you like your vampire fiction filled with action, paranormal twists, surprises, fantasy, and a bit of steam then you will want to sink your teeth into this opening book.

BUY THE PRIESTESS AND THE VAMPIRE and see what it’s like to be recruited. Readers 18+