Author Nolan’s second book in the Jake Wolfe series, Vigilante Assassin, grips you right off the bat and makes you sweat bullets to the very last page. With it’s non-stop action and characters that are very real and engaging this is certainly a thriller not to be missed. Enjoy! 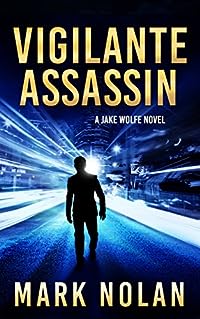 Every marriage has a secret, but this one is deadly. Lauren Stephens wakes up to find her husband, Gene, has vanished during the night. His phone is dead. Desperate, she hires Jake Wolfe and his war dog, Cody. They search the house and discover something so disturbing that Jake won’t allow Lauren near it. “No, if you see this, there is no unseeing it.”

Lauren thought she had it all: a loving partner, two great kids, a successful business, and a beautiful home in the San Francisco hills. But all of that is about to come crashing down, due to a missing husband, a hidden past, and a frightening secret that will shock a trusting wife to the core. Gene has enemies, and now they want something from Lauren.

Jake Wolfe is a flawed man who has a habit of being in the wrong place at the wrong time. He wants to leave his secret, violent past behind him, but when Lauren and her children are threatened, his protective instinct takes command. Jake soon finds himself involved in a dangerous conspiracy, targeted for death, and engaged in battle with a powerful, unseen group who will stop at nothing to get what they want.

Jake’s going to have to think fast and fight hard to protect Cody, Lauren and her kids.

Vigilante Assassin is “Jake Wolfe book two” in the ongoing series. It can be read as a stand-alone, or you can start with book one, titled: Dead Lawyers Don’t Lie.