‘Outside Looking Out’ by author Vasily Pugh, is the exciting sequel to ‘Basically Frightened’, a slightly unusual take on the post-apocalyptic yarn. Both books take a wry look at one man’s journey through a post-pandemic landscape as he forms new friends, alliances and enemies as he tries to make sense of the new world around him. Darkly humorous and the antithesis to the common genre piece, these two books are the start of something special. ‘The Insomniacs’ Club’ was written between the above two and is a dry-witted thriller featuring two strong heroines who become good friends in strange circumstances. Again, there is a focus on dark humor interspersed with drama and thrills. 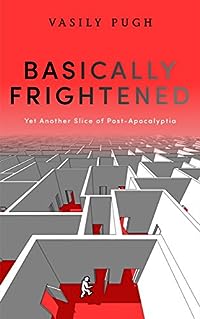 Basically Frightened: Yet Another Slice of Post-Apocalyptia
by Vasily Pugh

You haven’t read anything like ‘Basically Frightened’ before – a genre-busting mix of post-apocalyptic action, adventure and suspense all heavily laced with whimsy and observational humour. An unlikely hero, a global pandemic, a tentative venture into a fractured world, ‘Basically Frightened’ has been described as ‘Shaun of the Dead’ meets ‘Pushing Daisies’, a slice of fiction that embraces what ordinary people might do when ‘The Shakes’ begin. Meet feral kids, roaming bands of the moderately psychotic, minor local celebrities, plucky heroines, loveable old ladies, people whose love of certain popular sci-fi villains has gone too far and a mysterious organisation simply known as ‘Order’. 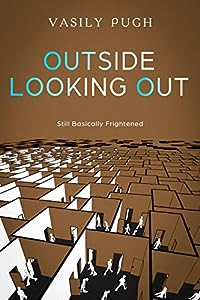 Leaner, meaner, wittier and wiser, the sequel to hit post-apocalyptic book ‘Basically Frightened’ is here. Taking place directly after the events of the original, ‘Outside Looking Out’ lands our hero in another set of unhinged circumstances. Who are ‘Order’? Who are ‘Protected Infected’? Where are his friends? Who are these new enemies? And who had the last Rolo?
Prepare to enter a dystopia quite unlike anything you’ve read before – ‘Outside Looking Out’ is a comic adventure that combines post-apocalyptic action with blistering satire and heartfelt emotion. 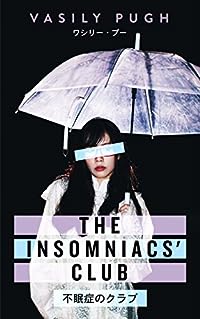 When Japanese ex-pat Naoka meets Henri, a middle-aged woman who is both wildly unconventional and is hiding something that she refuses to share, she finds herself introduced to a collection of oddities who share the same hindrance. They are all insomniacs.
This chance meeting soon provides Naoka with a much greater problem, when she and Henri become inadvertently caught up with the Fresno-DeBeers family, whose daughter has been kidnapped.
Henri is determined to ‘help’ the police with their investigation, and the Fresno-DeBeers to find their daughter, and enlists the assistance of the unwilling Naoka as part of her efforts.
As they get deeper and deeper into the case, living among oddballs and eccentric insomniacs who live their lives during the hours of darkness, they encounter the often weird and sometimes dangerous characters who inhabit the night.
But can they really make a difference to the case? Are they really able to provide anything of value and will they find the Fresno-DeBeers’ daughter before it is too late?
The Insomniacs’ Club is a page-turner that will have you up all night (in a good way).
Vasily Pugh, author of ‘Basically Frightened’, returns with his unusual take on crime fiction, sisterhood and suspense all whipped together with a healthy dollop of his trademark wit.