I dragged my two sweet children away from the dinner table early last night because I wanted to go stand in line and hour and a half early to get the number my child and hubby wanted for his football jersey. I didn’t understand the importance of getting that number, but I knew it was important, so I set aside two and a half hours of my life to get that number. I arrived at the location where the signups were to take place, and I was the first one in line. The people running the signups hadn’t even arrived yet, but I was first in line for the very important number. I waited for an hour, giving people the evil eye who tried to walk past me like there wasn’t a line. I’m the whole line people. Get behind me so we can make a line. For a good forty minutes there was only three of us making a line. I still wasn’t really getting the significance of having a specific number, but gosh darn it..if hubby and baby basset want that number they will get that number. When they started letting people in to hand in their paperwork and request a number I quickly handed in my paperwork and rushed to the uniform table to request my child’s size and number. I confidently requested 99, relieved that my mission would finally be over and would be a great success. Nope! Can’t have that number, something about linemen and bla bla bla. What? I have no idea what any of the words you just said mean. I quickly text my hubby the horrible news. He texts back, “No biggie, see if 51 is available.” Wait..what? No biggie? But I waited in line for an hour! I gave people the evil eye! I may or may not have kicked a grandmother! 51 was available. 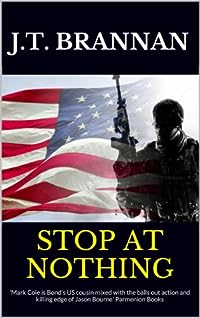 STOP AT NOTHING: Introducing America’s No.1 Covert Agent – Mark Cole
by J.T. Brannan

Mark Cole is a deniable operative for the US government, a patriot who is always willing to give his life for his country. Living in the Caymans with his wife and two children, he is no longer fully active, but due to his unique abilities he is called upon to perform a difficult assassination. The target is the Director of the CIA’s National Clandestine Service; but after the mission, Cole becomes a target himself. And as the forces against him mount up relentlessly, he realizes that greed and hunger for power at the highest levels means that he can trust nobody. Cole discovers that not only are thousands of lives at risk, but his own wife and children are threatened. Pushed into deciding whether to protect global security or to save his family, Cole vows that he will stop at nothing to do both – whatever the cost. 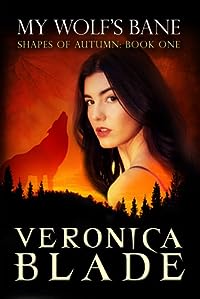 Autumn Rossi thought she was a normal teenager. Suddenly, she can outrun every critter in the forest, making her wonder if she’s even human.

When the new guy at school, Zack de Luca, witnesses a questionable scene, he unfairly pins her as stuck-up. He acts like he hates her, yet he keeps bailing her out of trouble. Not only is Zack both insufferable and irresistible, he seems to sniff her anytime he gets close.

As passion flares between them, Autumn isn’t sure which is more dangerous: her psycho ex-boyfriend, or falling for Zack — who’s risking his life just by being near her. 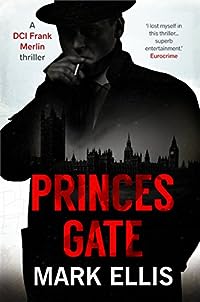 When a brilliant emigré scientist is killed by a hit-and-run driver and the body of a female employee of the American Embassy is washed up in the Thames, DCI Frank Merlin and his team investigate.

Merlin’s investigations soon ruffle feathers at the Foreign Office as the American ambassador, Joseph Kennedy is a well-known supporter of appeasement, and many powerful and influential Britons favour the pursuit of a negotiated peace settlement with Hitler.

The death of another embassy employee leads Merlin into some of the seedier quarters of wartime London. His investigations are hampered by interfering superiors fearful of their impact on Anglo-American relations. This at a time when, to many, America represents Britain’s only hope of salvation.

Capturing the atmosphere of Britain in January 1940 Princes Gate is an enthralling detective novel. 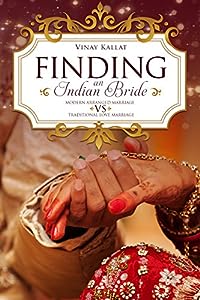 The story is inspired by real life events of an Indian guy, who is stuck in the process of an arranged marriage. It all started on his 24th birthday, when his mother realized that her youngest son had all grown up and was ready for a marriage.
This is the story of how he meets up with various interesting girls, and the anxiety he feels meeting the girl’s family for the first time. The author also depicts the insecurities and the heartbreak of his life, while trying to find a bride.
His complicated political work life entangled with a love story that would compel you to fall in love with the main character and at the same time feel sorry for him. How situations over power his logical reasoning at times. This book is for those who want to have a laugh at the awkward situation author is put through by his mother, to meet up random girls over a cup of coffee.
The author also depicts the various complex issues of his life and how those things add up to whom he gets married to. The story involves various characters in author’s real life that change the way he thinks about marriage.
The emotional turmoil that would make you feel his pain. This book also provides some of the vital information and processes involved in an arranged marriage. It also shows the desperation of the author to get out of an arranged marriage and his mother’s perseverance to overcome it.
This book would take you into a roller coaster ride depicting his every emotion, which ultimately affects his decisions. Societal pressure and beautiful distractions in his life, accompanied with his own insecurities makes it harder for him to decide what is the best choice for him. It is an internal fight between his brain to make a practical decision and his heart to make an emotional decision.
This is his mother’s proposal to get her son married to a girl she chooses for him. You have to read his story to know what he finally decides and would he do an arranged marriage or is there any more surprises that life has in store for him. 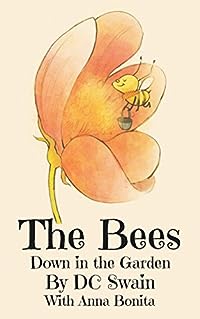 The Bees (Down in the Garden Book 1)
by DC Swain, Anna Bonita

Down in the garden beyond the apple trees,
is a fading blue hive, full of busy bees…
Join the bees down in the garden on a day of fun, danger and adventure in this beautifully illustrated picture book.

With a whimsical story and crisp, original illustrations, this is a story your children will want to read again and again.