Take a trip to Tuscany this summer with A Tuscan Legacy series! Each novella is a complete and satisfying romance, filled with faith, family, forgiveness and love. This nine-book Christian romance series from seven of your favorite authors releases weekly, so sit back, relax, and curl up with the first five of these wonderful romances. Enjoy! 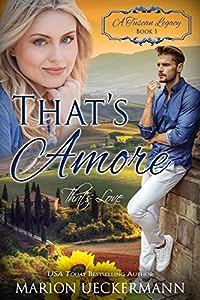 Begin your journey to Tuscany this summer with Book 1 of A Tuscan Legacy! Each novella is a complete and satisfying romance, filled with faith, family, forgiveness and love.

When Rafaele and Jayne meet again two years after dancing the night away together in Tuscany, is it a matter of fate or of faith?

After deciding to take a six-month sabbatical, Italian lawyer Rafaele Rossi moves from Florence to Tuscany, resigned to managing the family farm for his aging nonna after his father’s passing. Convinced a family get-together is what Nonna needs to lift her spirits, he plans an eightieth birthday party for her, making sure his siblings and cousins attend.

The Keswick jewelry store where Jayne Austin has worked for seven years closes its doors. Jayne takes her generous severance pay and heads off to Italy — Tuscany to be precise. Choosing to leave her fate in God’s hands, she prays she’ll miraculously bump into the handsome best man she’d danced the night away with at a friend’s Tuscan wedding two years ago. She hasn’t been able to forget those smoldering brown eyes and that rich Italian accent.

Jayne’s prayers are answered swiftly and in the most unexpected way. Before she knows what’s happening, she’s a guest not only at Isabella Rossi’s birthday party, but at Villa Rossi too.

When Rafaele receives what appears to be a valuable painting from an unknown benefactor, he’s reminded that he doesn’t want to lose Jayne again. After what he’s done to drive her from the villa, though, what kind of a commitment will it take for her to stay? 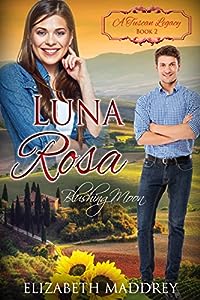 She loves the spotlight, he prefers backstage. Can they still play love’s duet?

Nick Carter’s career as a piano tuner and teacher keeps him off-stage and allows him plenty of time to compose music he has no intention of ever publishing. Enter Louisiana Chalfant, the new symphony pianist who embodies the word diva. She’s exactly the kind of woman Nick has vowed to avoid, but when they’re cajoled into playing a duet he finds there’s more to her than he first thought.

Louisiana settles into her temporary role with the symphony in Washington, D.C., glad for the reprieve from touring professionally. She’s astonished to discover immense talent in the handsome man who keeps her piano in tune. Practicing for a duet at church gives her the perfect opportunity to get to know the real Nick.

As they play together, Nick and Louisiana develop a friendship that begins to morph into something more, but what happens when their diverging goals threaten to upstage their love? 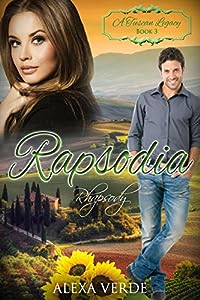 After the woman he loved left him for a richer guy, Marco Carter turned all his passion toward the chain of pizzerias he founded. He can control his business, unlike love. Then his world is turned upside down. He meets Samantha Jenkins on his flight home to Texas after his grandmother’s eightieth birthday. Many hours with the guarded but beautiful Samantha has him questioning his career-centered mindset.

A born risk taker and fiercely independent, Samantha misses her former life as a travel photographer and extreme sports aficionado. But more than anything, she grieves her fiancé. On her trip from Italy on the anniversary of his tragic passing, the last thing she expects is to become drawn to her neighbor on her flight. Deep inside, she still blames herself for her fiancé’s death…

Though Marco is determined to forget Samantha, the arrival of a mysterious painting reminds him of all that is missing in his life. Hoping for a new chance with her, Marco opens a pizzeria in Samantha’s hometown in south Texas. Spending time with her, he’s learning to surrender control to the Lord. But apparently it’s easier to earn millions than to make Samantha open her heart again. What will it take for her to heal enough to trust in God and take the biggest risk of all-to love again? 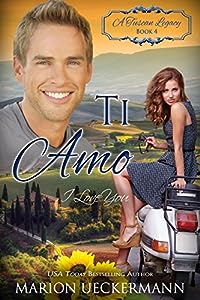 She never wants to get married. He does. To her.

The day Alessandra Rossi was born, her mammà died, and a loveless life with the father who blamed the newborn for her mother’s death followed. With the help of her oldest brother, Rafaele, Alessa moved away from home the moment she finished school — just like her other siblings had. Now sporting a degree in Architectural History and Archaeology, Alessa loves her job as a tour guide in the city of Rome — a place where she never fails to draw the attention of men. Not that Alessa cares. Fear that the man she weds would be anything like her recently deceased father has Alessa vowing to remain single.

American missionary Michael Young has moved to Rome on a two-year mission trip. His temporary future in the country doesn’t stop him from spontaneously joining Alessa’s tour after spotting her outside the Colosseum. And being bold enough to tell her afterward that one day she’d be his wife. God had told him. And he believed Him. But Alessa shows no sign of interest in Michael.

Can anything sway the beautiful and headstrong Italian to fall in love? Can anyone convince her to put her faith and hope in a Heavenly father, despite being raised by an earthly one who never loved her? Will her sister’s prompting, or a mysterious painting, or Michael himself change Alessa’s mind? About love. And about God. 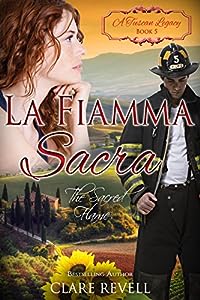 Forged in love’s sacred flame, can a firefighter and a widow find the path God set for them?

Ric Rossi left the family farm in Tuscany and never looked back. Working as a firefighter in Reading, England, he has everything a man could ask for — a secure job, a firm faith, and a neighbour who cares for his cat Noci when he goes away. The only thing missing is a woman he can share his life with.

Widowed when her son Deforest was a week old, Bracken Hughes isn’t prepared to open herself to the heartache a relationship can bring. Especially with her handsome neighbour who risks his life each time he leaves for work. No matter how good the man is with her son.

Ric finds Deforest to be an appealing child who captures his interest. And the mother has that certain something that pricks his heart. But the unhealed wound in Ric’s soul might just spoil any chance he has at love.