If you’re a fan of Steven Spielberg movies and HG Wells stories, then David McGowan’s From the Sky trilogy is for you. This fast paced, intriguing, addictive read is ‘alien invasion’ with a whole different angle and context. Enjoy! 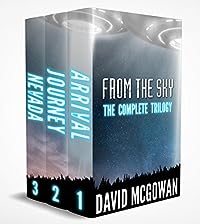 From the Sky: an alien invasion series – The Complete Trilogy
by David McGowan

Camberway is like any small American town, until the day the vast UFOs invade its skies.

A sequence of strange and terrifying events lay bare the town’s deepest, darkest secrets. Alien beams rain down, and the people of Camberway pay a terrible toll.

Those who are left must endure an apocalyptic nightmare. Sheriff Jim Hoolihan will do whatever he can to lead them to safety, but the danger is not only in the skies.

Can they make it out and find other survivors?

Are the aliens here to punish, or enlighten? What are their secrets?

Some of them made it out of Camberway alive. They survived the ARRIVAL.

Join them as they flee the invading spacecraft across a deserted, destroyed California, in search of civilization, in search of answers.

Did the aliens spare them for a reason? Is anywhere safe from the terrifying creatures?
Who is the entity that stalks them, and what does he want?
What is the shocking secret one of their group guards?

Can they stay alive, and sane?
Can they survive… the JOURNEY?

After the devastating finale of JOURNEY, the survivors meet a man who will lead them to their final destination.

Will they make it to the top-secret government base in time?

Or will their precious cargo, the alien artifact, be destroyed?

Ten-year-old Tucker Turner knows everything about the aliens, but one of their group could sabotage their mission before he has the chance to reveal the Falisiika’s secrets.

Is the challenge facing them too large for humankind to survive?

When From the Sky reaches its explosive conclusion, will you be able to handle the final revelation?