Today we have a wonderful collection of books from author John D. Ottini, that is both captivating and entertaining. Mr. Ottini is a fantastic storyteller that grabs you from the first page and takes you on a journey you wont soon forget. Enjoy! 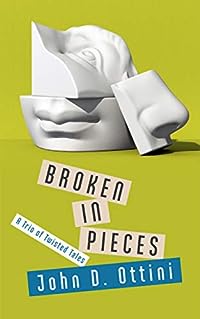 Broken in Pieces is made up of three short stories written in the style of the classic television show The Twilight Zone.

Follow Diana, Blake and Lena through their strange and twisted stories where things are not necessarily as they appear.

In “A Toast to My Sorry Life,” Lena Dancer comes to a sad realization that her life is nothing like she thought it would be. After giving up everything for a man who promised her the world, she’s left with a cheating husband and a vengeful heart. Sometimes when dreams vanish into thin air, the only thing that remains is a desire for cold, hard revenge.

In “Disturbing Conversations”, Diana Delancy is having a difficult time coming to grips with the loss of her only child. If that isn’t enough of a burden, now she’s beginning to think that she’s losing her mind. 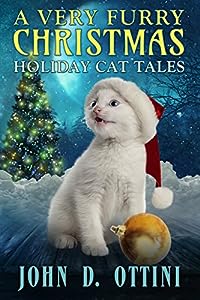 Dear Reader: Please be aware that this is not a children’s book.

For most people Christmas is a time for reflection, a time to share and celebrate with family and friends, but for some it is a time of sadness and quiet desperation. What if your soul mate, best friend and lover is no longer around to share in the season of joy and you are about to lose the last remaining link to a life you once knew and loved. Would you find the strength to survive?
Slipper’s Last Breath is a story about love, companionship and triumph over tragedy.

Some might call it a Christmas miracle, but I call it the power of unconditional love.

Sometimes the best gifts are the unexpected ones. After enduring the heartbreak of a bad marriage, Beth is in no mood to celebrate the Christmas season. It’s sad enough spending the holidays alone, but watching Spice, her five-year-old Labrador retriever, mope around the house was more than she could bear. A visit to Miller’s tree farm to cheer up her canine companion leads to an unexpected find and the possibility of a new found relationship.

When she least expects it, Beth rediscovers love and the magic of Christmas.

She was born under the loading dock behind Johnson’s Market and lost her mother when she was only five weeks old. One of a litter of six, she and her siblings had to learn to fend for themselves at a young age. The life expectancy of a feral cat is short, but thanks to the generosity of a compassionate store owner, the kittens were well fed and enjoying their lives. Then one day a stranger appears and takes her away from the safety of her kin. Confused and frightened, she is forced to endure an uncaring human and ultimately the forces of nature, in hopes of returning to the ones she loves.

A Charcoal Christmas is a bittersweet tale of survival, hope and loving companionship.

A troubled priest struggling with doubts about his faith and vocation has an unexpected encounter with a stray, weather-beaten black cat. When Father Pedro decides to provide warmth and shelter for the lost creature, he has no idea how this simple act of kindness will impact his life forever.