At 2am this morning I made a wonderful discovery. I am big and I have opposable thumbs. Give me a little bit of a break. It was only 2am. This discovery though was huge. Sweet little Casper once again decided he wanted to get up and play. Unlike yesterday I wasn’t going to give in to his demands and instead I used my bigness and thumbs to take control of the situation. 2am is not going to be playtime ever again. Today I took a stand and put him outside for a quick pee, then right back into his crate where he proceeded to throw the biggest temper tantrum I have ever heard. There were a few times I was certain he was going to cry himself to death. TO DEATH! It would have driven me nuts, but the sounds coming from that crate were incredible. At one point he sounded like two Ewoks getting into an argument over something very very shiny. Not sure why it was over a shiny object, but it was. Trust me. There was nothing wrong with him. He just wanted to play. Yesterday he played for about 20 minutes and went back to sleep. It’s not like he needs to do anything important at 2am. He doesn’t have to go on some top secret mission to save the planet, so he can just stay in bed and wait until it’s time to get. I am big and I have thumbs. Decision made. There might have been a third Ewok. 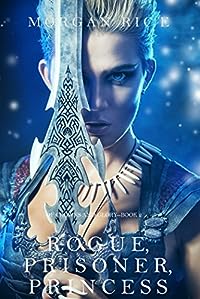 Rogue, Prisoner, Princess (Of Crowns and Glory—Book 2)
by Morgan Rice

17 year old Ceres, a beautiful, poor girl from the Empire city of Delos, finds herself forced, by royal decree, to fight in the Stade, the brutal arena where warriors from all corners of the world come to kill each other. Pitted against ferocious opponents, her chances of survival are slim. Her only chance lies in drawing on her innermost powers, and making the transition, once and for all, from slave to warrior.

18 year old Prince Thanos wakes on the isle of Haylon to discover he has been stabbed in the back by his own people, left for dead on the blood-soaked beach. Captured by the rebels, he must crawl his way back to life, find who tried to assassinate him, and seek his revenge.

Ceres and Thanos, a world apart, have not lost their love for each other; yet the Empire court teems with lies, betrayal and duplicity, and as jealous royals weave intricate lies, they each, in a tragic misunderstanding, are led to believe the other is dead. The choices they make will determine each other’s fate.

Will Ceres survive the Stade and become the warrior she was meant to be? Will Thanos heal and discover the secret being withheld from him? Will the two of them, forced apart, find each other again?

ROGUE, PRISONER, PRINCESS tells an epic tale of tragic love, vengeance, betrayal, ambition, and destiny. Filled with unforgettable characters and heart-pounding action, it transports us into a world we will never forget, and makes us fall in love with fantasy all over again. 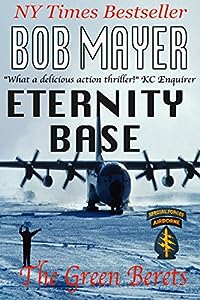 Eternity Base (The Green Berets Book 5)
by Bob Mayer

Maverick federal employee Sammy Pintella, obsessed with uncovering the fate of her MIA father, makes a startling discovery while rifling through some inactive government files. A dozen, faded black and white photos seem to point to the existence of a secret US Military base built in the frozen wastelands of Antarctica during the height of the Cold War.

Aided by Special Forces veteran Dave Riley, she heads for Antarctica. But they aren’t alone. Spies, North Koreans, and other shadowy forces are also en route, because deep inside Eternity Base is something people will go to extreme lengths to get: a cache of nuclear warheads. 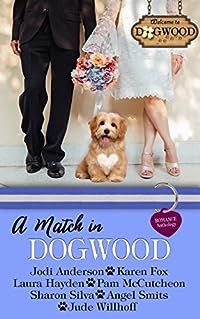 In this prequel to the Dogwood series, you’ll learn how the legend of the matchmaking dog came to be, and meet many of the quirky characters who made life in Dogwood, Colorado interesting over the years. The short stories include:

“A Forever Kind of Love” by Pam McCutcheon
When two high school sweethearts are reunited after he returns from the military, can they find love again?

“Gone to the Dogs” by Laura Hayden
When two strangers drive together cross-country to deliver a school bus, they rescue several stray dogs along the way. But will they be able to rescue each other?

“The Cowboy and the Librarian” by Jodi Anderson
Caught together in a snowstorm, can a cowboy and a librarian find common ground with the help of a canine matchmaker?

“A Match in Disguise” by Pam McCutcheon
Susan Brown has always hated her bland, boring name and life. Will a reunion with the town’s golden boy help her shine?

“Rescuing Nora” by Jude Willhoff
When Nora Blake wrecks her car in a snowstorm, will she freeze to death before she can reunite with her estranged husband?

“In Search of a Match” by Sharon Silva
Determined to find her soul mate, Emily Harrington accidentally kidnaps the town’s matchmaking dog. Will Match be able to help her find her soul mate… or will the handsome police officer intervene?

“Give a Dog a Chance” by Karen Fox
Dog trainer Jenna Howard proposes a program to give rescued dogs and prison inmates a second chance, but will Brand Thatcher, the man who dumped her after high school, approve it?

“Take Me Home” by Angel Smits
When Gina and Ted find their marriage hitting a rough patch, can their marriage be saved with the help of their grandchild and a special dog?

This collection of stories range from humorous to emotional, but each and every one is a heartwarming story about couples who are fated to be together, and the dogs who love them.

Dogwood, Colorado: where the best things in life are rescued. Download your copy today! 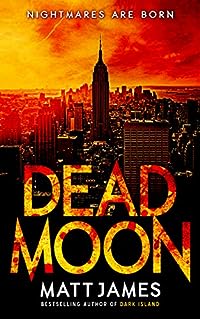 NYPD Detective Frank Moon thought he’d seen everything. Then, a meteor landed in Central Park, exposing the surrounding area to a hellish radiation. Something instantly occurred to those who witnessed its entry into Earth’s atmosphere — something within their genetic code changed. And it happened violently.

In search of his wife, Frank is forced to weave his way through the chaos that was Manhattan. The space rock, Abaddon, not only carried with it a sinister red glow, but it also brought with it the closest thing to evil anyone had ever seen.