From The Ashes, A Heroes Will Rise

The Nuclear Dawn Series by Kyla Stone, is an apocalyptic survival thriller exploring what might happen if terrorists executed a nuclear attack on the United States, told from the perspectives of ordinary people determined to survive. Featuring fast-paced action and strong, complex characters, this series is perfect for fans of Logan Keys, Jacqueline Druga, Mike Kraus, and Boyd Craven. Enjoy!

Surviving the blast is only the beginning…
Dakota Sloane, a tough-as-nails former foster kid, has spent her life running from the past. Logan Garcia, a man haunted by secrets, has only one goal: to drink himself into oblivion.

They’re two strangers in a bar–until the news reports nuclear bombs in New York City and Washington, D.C. Fearing Miami may be next, Dakota’s first thought is to grab her little sister–still trapped in the system–and get the hell out of Dodge.

Then the world explodes. As buildings collapse and fires rage, utter chaos erupts.
There’s nowhere to run. No time to escape. Alive but trapped in the burning city, Logan and Dakota have less than ten minutes to seek shelter before the lethal fallout descends.

But Dakota’s sister is still out there. To rescue her, Dakota will need Logan’s help, but can she trust him? And how far is she willing to go to save the only family she has left?

*Rated PG-13. Be aware of spoilers in the reviews if you don’t like spoilers.* 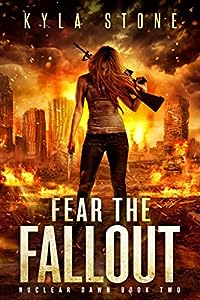 If the radiation doesn’t kill you, the survivors will… Dakota and Logan continue their treacherous journey to escape the city, but danger threatens at every turn. They must avoid uncontrollable fires, unstable buildings, and deadly fallout contamination.

Dakota knows of a place to ride out the coming chaos–a safe house deep in the Everglades. If Logan helps her rescue her sister, she’ll take him with her.

But Dakota’s past has caught up to her. Amid the radioactive ruins of Miami, someone is hunting her. And he won’t stop until he has her… or they’re both dead. 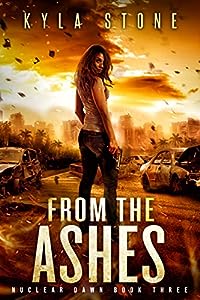 From the Ashes: A Post-Apocalyptic Survival Thriller (Nuclear Dawn Book 3)
by Kyla Stone

From the ashes, heroes will rise… In an instant, Miami was devastated by a nuclear bomb. Millions fled the destruction as the lethal fallout descended.

Now, the entire city is a hot zone. Hundreds of thousands of citizens are homeless, hungry, and growing more desperate with every passing hour.

While the government scrambles to respond to the worst humanitarian crisis the U.S. has ever seen, Dakota and Logan flee the hot zone. The insidious radiation can’t be escaped. It’s already inside them.

Their only chance to survive is to reach the nearest emergency hospital, but deadly foes are determined to stop them. And in the background, unnoticed, a formidable enemy rears its head…