Sorta Not, But Kinda Mean

I did something that was sorta mean, but it really wasn’t. I had two containers, with one slightly smaller than the other, and I used them for my sweet pups dry food. Just to mess with my family, I put my older pup Junebug’s food in the smaller container, and the youngest pup Casper’s in the larger. I labeled each container with the pup’s names and put them away. When it came time for my baby bassets to feed the pups they were confused. Why on Earth would I put the older pup’s food in the smaller container? It should be in the bigger container. This one little act seemed completely wrong to them and they didn’t like it one bit. My youngest was very bothered by this. There is no logical reason why I have to put the older pups food in the larger container, but for some reason it just seems wrong. RIGHT!!??? 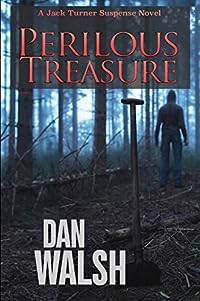 Young history Professor Jack Turner is settling into his new position at Culpepper University, when he gets a surprise visit from his friend, police Sgt. Joe Boyd. Joe has started a new hobby, a fun pastime that’s also helping him lose some weight — metal detecting. Joe asks if he can do this on Jack’s lakefront property, which includes over a dozen acres of woods. Intrigued by a hobby that combines physical exercise and Jack’s love of history, Jack asks to tag along. Neither man has any idea that this seemingly harmless hobby will cause their paths to cross with a 70-year-old mystery involving tragedy, smuggling, multiple murders and stolen Nazi loot. It’s just an innocent hobby Jack tells his wife, Rachel. Really, what could go wrong?

In a matter of seconds, nuclear bombs devastate multiple American cities. Utter chaos erupts. Millions flee the destruction as the fallout descends…
Dakota Sloane, a tough-as-nails former foster kid, has spent her life running from the past. Logan Garcia, a man haunted by secrets, has only one goal: to drink himself into oblivion.

They’re two strangers in a bar–until the news reports nuclear bombs in New York City and D.C. Fearing that Miami might be next, Dakota’s first thought is to grab her little sister and escape to her prepper friend’s homestead in the Everglades.

Then everything explodes. Trapped in the burning city, Logan and Dakota have less than ten minutes to seek shelter before the lethal fallout reaches them.

But Dakota’s sister is still out there. To rescue her, Dakota will need Logan’s help, but can she trust him? And how far is she willing to go to save the only family she has left?

Surviving the blast is only the beginning…
The acclaimed Nuclear Dawn series explores what might happen if terrorists successfully executed a coordinated nuclear attack on the United States. Featuring fast-paced action, complex characters, and explosive twists, Point of Impact is perfect for fans of Logan Keys, Jacqueline Druga, Mike Kraus, and Boyd Craven. 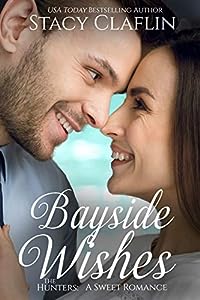 Bayside Wishes: A Man in Uniform Romance (The Hunters Book 6)
by Stacy Claflin

Freya Hunter is living the fabulous life. The west-coast girl rakes it in as a fashion model in New York City, but everything changes after she returns home for a quick visit.

The reunion with friends and family in Enchantment Bay is sweet, especially when she hits it off with Nico Valentin, a ruggedly handsome police sergeant. As Nico investigates the death, Freya learns a family secret big enough to turn her world upside down.

Freya is torn between her new life and her hometown — the life she loves vs. the brother who needs her and the sergeant who wants her. When her decision doesn’t go nearly as well as she planned, she wonders if she can help her brother and keep her growing feelings for Nico at bay before they consume her. 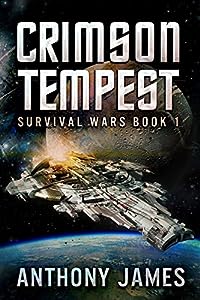 Fifty-three years after it vanished, Earth’s only Super-Devastator warship, the ESS Crimson sends out a distress signal…
Humanity is fighting against an implacable foe. The Ghasts – a ruthless alien race – seem hell-bent on wiping out mankind. They have a vast warfleet and their technology is advancing at a terrible rate.

Captain John Nathan Duggan and his crew are given a mission – find the missing ESS Crimson and bring it home. Little does Duggan realise, this is no ordinary mission. As he struggles against enemies both within and without, he desperately tries to unlock the mystery surrounding the Crimson’s disappearance and the unknown weapons it carries. He soon discovers the missing warship might be the only hope for salvation that mankind has left.

When everything is veiled in secrecy nothing is easy, as Duggan is about to find out. 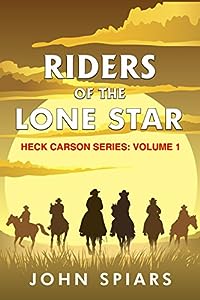 Writing in the style of Louis L’Amour, Larry McMurtry and William W. Johnstone, Best-selling western author, John Spiars has created a timeless hero of the old west. The first novel in the Heck Carson Series, Riders of the Lone Star brings the wild and lawless Texas frontier to life.

When the Law ain’t enough…
He brings Justice.

The year is 1852. Settlers on the Texas frontier are at the mercy of hostile Comanche and vicious outlaws, and the only ones holding the line between life and death are a few brave men, known as Texas Rangers. Outnumbered and outgunned, they bring law and order to the untamed land. They face impossible odds with nothing more than grit, determination, and a fast gun. It is this adventure and excitement that lures sixteen-year-old Jesse “Heck” Carson to leave his families ranch to join the fight. Heck quickly learns that this life comes at a price, the cost of which is hardship, danger, and possibly his own life. The bonds of friendship, loyalty, and duty lead him into epic battles that test his courage and resolve, and along the way he learns what it means to wear the star of the Texas Rangers.