Where They Go To Run

Bring me the bag of Price Drops, she said in a whisper. 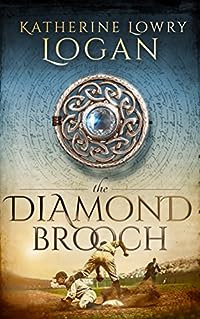 And one of those curveballs is thrown by a blue-eyed pitcher!

ESPN baseball analyst Amy Spalding is swept back in time by a magical brooch and finds herself in 1909 New York City. With only the clothes on her back, a phenomenal memory for New York Giants players and stats, and a brooch that won’t take her back home, she does what she has to do, pawns her jewelry.

When New York Times best-selling author Jack Mallory discovers Amy in the background of the iconic photograph of Ty Cobb kicking up a cloud of dirt as he slides hard into third base, Jack along with Kevin Allen, JL O’Grady, Connor O’Grady, and Pete Parrino launch a rescue mission to return Amy to the present before her boyfriend goes on trial for her murder.

Can the time travelers hold out against stalkers, PTSD, phobias, and failing relationships long enough to find a thief and recover the stolen diamond brooch so they can all go home? And can Jack and Amy find the soul mate of their dreams on a voyage of lost hopes and new beginnings? 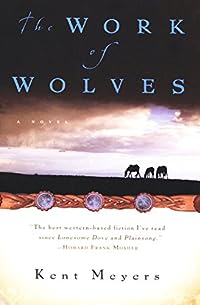 The Work of Wolves: A Novel
by Kent Meyers

This story of a horse trainer and a rich man’s wife is “a gorgeously written, exacting exploration of duty and retribution set in dusty rural South Dakota” (Publishers Weekly).

When fourteen-year-old Carson Fielding bought his first horse from Magnus Yarborough, it became clear the teenager was a better judge of horses than the rich landowner was of humans. Years later, Carson — now a skilled and respected horse trainer — grudgingly agrees to train Magnus’s horses and teach his wife to ride.

But as Carson becomes disaffected with the power-hungry Magnus, he also grows more and more attracted to the rancher’s wife, and their relationship sets off a violent chain of events that unsettles their quiet town in South Dakota. Thrown into the drama are Earl Walks Alone, a Lakota trying to study his way out of the reservation and into college, and Willi, a German exchange student confronting his family’s troubled history. 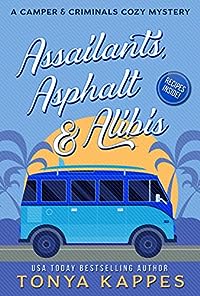 Welcome to Normal, Kentucky~ where nothing is normal. A Campers and Criminal Mystery Series is another brainchild of USA Today Bestselling Author Tonya Kappes. If you love her quirky southern characters and small town charm with a mystery to solve, you’re going to love her new cozy mystery series!

The legend of John Swift Silver Mine has been a tale tell around the Daniel Boone National Park for over 400 years. This year the treasure hunters have descended upon Normal and staying in Happy Trails Campground before they head out on their yearly expedition to find the treasure.

Once again, Mae and the Laundry Club ladies, along with Mary Elizabeth, find themselves doing things they never thought they’d never do. Go on a treasure hunt! They pile into Mae’s RV and join the treasure hunters so they too can try their luck at striking it rich.

Telling stories around a campfire about the curse of the John Swift Silver Mine is a fun story… until one of the treasure hunters is found dead… was it the curse or was it murder?

Mae discovers an unheeded warning that will bring the tall tale to life if she can’t end the story for good before the killer strikes again with or without finding the John Swift Silver mine. 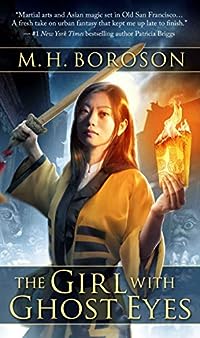 The Girl with Ghost Eyes: The Daoshi Chronicles, Book One
by M. H. Boroson

It’s the end of the nineteenth century in San Francisco’s Chinatown, and ghost hunters from the Maoshan traditions of Daoism keep malevolent spiritual forces at bay. Li-lin, the daughter of a renowned Daoshi exorcist, is a young widow burdened with yin eyesthe unique ability to see the spirit world. Her spiritual visions and the death of her husband bring shame to Li-lin and her fatherand shame is not something this immigrant family can afford.

When a sorcerer cripples her father, terrible plans are set in motion, and only Li-lin can stop them. To aid her are her martial arts and a peachwood sword, her burning paper talismans, and a wisecracking spirit in the form of a human eyeball tucked away in her pocket. Navigating the dangerous alleys and backrooms of a male-dominated Chinatown, Li-lin must confront evil spirits, gangsters, and soulstealers before the sorcerer’s ritual summons an ancient evil that could burn Chinatown to the ground.

With a rich and inventive historical setting, nonstop martial arts action, authentic Chinese magic, and bizarre monsters from Asian folklore, The Girl with Ghost Eyes is also the poignant story of a young immigrant searching to find her place beside the long shadow of a demanding father and the stigma of widowhood. In a Chinatown caught between tradition and modernity, one woman may be the key to holding everything together. 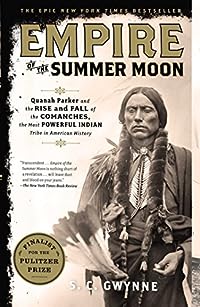 Empire of the Summer Moon
by S. C. Gwynne

Finalist for the Pulitzer Prize
This stunning historical account of the forty-year battle between Comanche Indians and white settlers for control of the American West was a major New York Times bestseller.

In the tradition of Bury My Heart at Wounded Knee, a stunningly vivid historical account of the forty-year battle between Comanche Indians and white settlers for control of the American West, centering on Quanah, the greatest Comanche chief of them all.

S. C. Gwynne’s Empire of the Summer Moon spans two astonishing stories. The first traces the rise and fall of the Comanches, the most powerful Indian tribe in American history. The second entails one of the most remarkable narratives ever to come out of the Old West: the epic saga of the pioneer woman Cynthia Ann Parker and her mixed-blood son Quanah, who became the last and greatest chief of the Comanches.

Although readers may be more familiar with the tribal names Apache and Sioux, it was in fact the legendary fighting ability of the Comanches that determined just how and when the American West opened up. Comanche boys became adept bareback riders by age six; full Comanche braves were considered the best horsemen who ever rode. They were so masterful at war and so skillful with their arrows and lances that they stopped the northern drive of colonial Spain from Mexico and halted the French expansion westward from Louisiana. White settlers arriving in Texas from the eastern United States were surprised to find the frontier being rolled backward by Comanches incensed by the invasion of their tribal lands. So effective were the Comanches that they forced the creation of the Texas Rangers and account for the advent of the new weapon specifically designed to fight them: the six-gun.

The war with the Comanches lasted four decades, in effect holding up the development of the new American nation. Gwynne’s exhilarating account delivers a sweeping narrative that encompasses Spanish colonialism, the Civil War, the destruction of the buffalo herds, and the arrival of the railroads — a historical feast for anyone interested in how the United States came into being.

Against this backdrop Gwynne presents the compelling drama of Cynthia Ann Parker, a lovely nine-year-old girl with cornflower-blue eyes who was kidnapped by Comanches from the far Texas frontier in 1836. She grew to love her captors and became infamous as the “White Squaw” who refused to return until her tragic capture by Texas Rangers in 1860. More famous still was her son Quanah, a warrior who was never defeated and whose guerrilla wars in the Texas Panhandle made him a legend.

S. C. Gwynne’s account of these events is meticulously researched, intellectually provocative, and, above all, thrillingly told. Empire of the Summer Moon announces him as a major new writer of American history.