New Year, New Me! If I hear that one more time I am going to lose my mind. BLGAGAGHGGEV!! Just like that. I try to fight it, but I am getting sucked into the notion that it’s a new year, so now is the time to make a few changes. Right now I am just trying to be a good person and make good choices. Not an easy task. The being a good person part is soooo hard. Any time I get in a car or go out in public, I am tested. The only reason I made it through the day yesterday is because I was stuck at home the whole time with a ripping headache. But that counts and I am taking the win for the day. I shouldn’t be so hard on myself. I have made some changes in my life that were on my list of goals. I have started making good dinners for my family. Breakfast and lunch was always easy, but trying to think about what to make for dinner, and then getting the ingredients was absolutely the WORST! We are now using a food service that sends us the recipes with ingredients every other week. It’s amazing just how much better that has made it for everyone. I still hate cooking, but at least I don’t have to think about what to cook. It’s working out pretty well. I am becoming more confident in the kitchen, and my family is eating better foods. I am actually feeling pretty good about that… lets see what is next on my goals list. 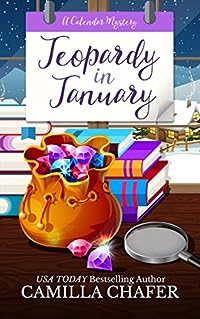 Welcome to Calendar where life is sweet, but death is murder.

Sara Cutler loves her job as head librarian of the public library, an integral part of the historic heart of the picturesque mountain town, Calendar. The combination of old books, quirky clientele, and endless reading is nothing less than perfection for Sara. So when she discovers a body in the rare books section that threatens to destroy her quiet existence, along with the imminent demise of the library, Sara vows to find the killer.

She never expects to receive any help from Jason Rees, the handsome, big city developer whose only objective is to get rid of the library. Sara assumes he is counting on the murder to serve as the final death knell his firm needs to demolish the library. However, that doesn’t prevent him from falling head over heels for the very woman with whom he’s clashing.

When news arrives that the dead woman was nothing that she appeared to be, the whole town is instantly enthralled by the concept of having an actual jewel thief in their midst. Even more puzzling is: where did she hide her stolen treasure?

All Sara must do to save the library is simply solve the murder, find the hidden jewels, and convince herself not to succumb to the one man she would rather see run out town. It doesn’t take long before she realizes that amateur sleuthing isn’t as easy in real life as it is in the stories she loves to read. 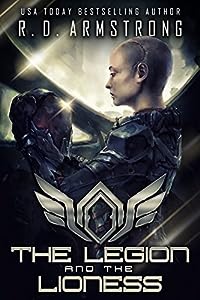 The Legion and the Lioness (World Apart Book 1)
by Robert D. Armstrong

They said I would never finish flight school. Never rank at the top of my class. Never fly with the top aces. Never return from combat against the Kelton androids. Never survive emergency surgery.
Here I am.
The year is 2151, Earth is gone. A hellscape. I’ve been unfrozen after 72 years of cryosleep on a medical facility on Saturn’s moon, Titan. I have nothing, no home, no friends, no concept of this new world, these Titans.
All that remains is the old conflict that has blackened my veins and memories of the ones I loved still fresh in my heart. Forgotten for decades.
But it seems war hasn’t forgotten me, no, even in my slumber. My name is Captain Victoria Ann Belic, I was a wife and an ace fighter pilot, and have been revived for one reason–to die again.

The Legion and the Lioness is the first installment of the four book series. 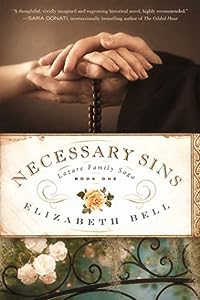 In antebellum Charleston, a Catholic priest grapples with doubt, his family’s secret African ancestry, and his love for a slave owner’s wife.

Joseph Lazare and his two sisters grow up believing their black hair and olive skin come from a Spanish grandmother — until the summer they learn she was an African slave. While his sisters make very different choices, Joseph struggles to transcend the flesh by becoming a celibate priest.

Then young Father Joseph meets Tessa Conley, a devout Irish immigrant who shares his passions for music and botany. Joseph must conceal his true feelings as Tessa marries another man — a plantation owner who treats her like property. Acting on their love for each other will ruin Joseph and Tessa in this world and damn them in the next.

NECESSARY SINS is the first book in the sweeping Lazare Family Saga that transports readers from the West Indies to the Wild West, from Charleston, Paris, and Rome into the depths of the human heart. Passion, prejudice, secrets, and a mother’s desperate choice in the chaos of revolution echo through five generations. If you enjoyed THE THORN BIRDS or the novels of Sara Donati, dive into Elizabeth Bell’s epic historical fiction today. 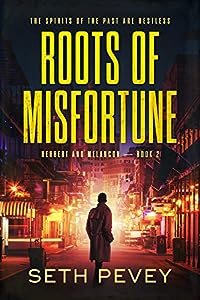 This gripping, page-turning thriller from the author of The Krewe, delves deeply into the mysterious, tragic, and dark world of occult New Orleans and its sordid history.

The dead girl is holding roots, one grasped tightly in each palm, when the NOPD finds her mangled body out on Interstate 10.

David Melancon has gone independent. The corruption on the force was just too much for an old detective who doesn’t play ball. But there is something eerily familiar about the details of this young girl’s demise as he reads them in the Picayune. Something deeply personal. Something he can’t drink his way past this time.

But he’s got his young and naïve partner, Felix Herbert, to think about. The boy hasn’t even let the ink dry on his newly-minted PI’s license. He just isn’t ready for this kind of case.

Yet, when another girl goes missing the same week, a knock at the door ensures the two unlikely partners won’t have a choice. They soon find themselves entangled in an ever-thickening web of cruelty, violence, and revenge.

As they search for the missing girl, they’ll confront Voodoo priestesses, Mardi Gras Indians, and a secret at the root of things so terrible that, once uncovered, will change David Melancon’s life forever. 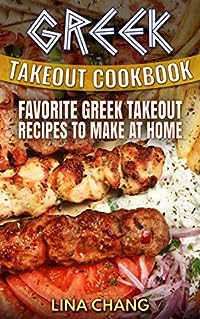 Greek cuisine is a remarkable blend of East and West. It is Mediterranean cuisine at its best with diverse influences. From the East are the touches of exotic spices, and from the West are the Italian additions of garlic and tomato. Greek dishes make use of fresh produce and what is abundant in different regions in Greece such as grains, legumes, vegetables, meat, seafood, olive oil, and rice. To savor Greek cuisine is to savor history, culture, and love. Every Greek home cook prepares dishes using the freshest ingredients – thoughtfully seasoned with herbs and spices – prepared in age old tradition to preserve nutrients, for a happy and healthy family.

A brief history of Greek takeout food.
Ingredients used in Greek cooking, cooking methods and required cooking equipment used to prepare Greek meals
Easy to prepare appetizers like the Zucchini Fritters or the Fried Calamari
Traditional salads like the Classic Greek Salad or the Marouli Salad
Heartwarming soups like the Avgolemono, a delicate lemon and chicken-rice soup
Classic takeout sandwiches like the Souvlaki Pita Sandwich
Delicious beef, pork and lamb recipes like the Pork Souvlaki, the Beef Kebab, the Lamb Chops or the Greek-Style Stuffed Peppers
Favorite chicken recipes like the Greek-Style Grilled Chicken or the Chicken Gyro
Delightful seafood recipes like the Grilled Greek-Style Fish or Stuffed Squid recipe
Healthy vegetable and side recipes like the Spanakorizo, a lemony spinach rice pilaf or the Baked Lemon Potatoes
Sweet desserts like the Classic Baklava or the Rizogalo, a delicate rice pudding