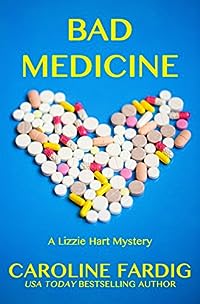 What do a smokin’ hot detective, an evil chiropractor, and a couple of blind dates from hell have in common? Lizzie has to wrangle them all in the third book of THE LIZZIE HART MYSTERIES series!

Lizzie Hart is overjoyed that six whole months have passed without a single murder in the sleepy town of Liberty. It’s also been six months since Blake Morgan heartlessly dumped her, but she’s determined to get over him. She’s slimmed down, ready to party, and injury-free, except for a little nagging pain in her ankle. She’s also very single, but her friends are doing everything in their power to fix that–including setting her up on one disastrous blind date after another.

Lizzie’s reprieve is short-lived when an old friend of hers is found dead from an apparent drug overdose. She wants to write it off as bad behavior after having seen the guy cheating on his wife with the new chiropractor in town. However, when she sees that same chiropractor playing doctor with another man who ends up dead, she worries there could be murder afoot.

Doing her best to stay on the right side of the law this time, Lizzie decides to go straight to the police with her suspicions. Unfortunately, the only cop available to speak with her is the stern yet hot new detective who has already given her a traffic ticket and a reprimand for public intoxication. Not surprisingly, he brushes her off, leaving her no choice but to begin snooping on her own. Lizzie soon learns she’s going to need help to get to the bottom of this mystery, but her best partner in crime solving, Blake, has turned into her worst enemy.

Can Lizzie and Blake find a way to work together to catch the killer… or will they kill each other first? 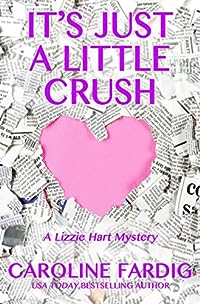 The sleepy town of Liberty hasn’t seen murder in… well… ever. Residents are stunned when the body of a young woman is found strangled, and reporters at the Liberty Chronicle are thrilled, rather disturbingly, over the biggest news story to hit town this century.

Lizzie Hart has even bigger problems. Lately, she can’t seem to concentrate on her job as copy editor at the Chronicle with the new hunky investigative reporter, Blake Morgan, swaggering around the office. How can a girl work when she’s using all of her energy combating Blake-induced hot flashes and struggling to repress the giggly inner schoolgirl that’s constantly rearing her dorky head? It’s a good thing that Blake barely knows Lizzie exists.

After an odd string of events, however, Lizzie begins to wonder if Blake is really as fabulous as she has fantasized. When Lizzie and Blake find a co-worker dead, Blake’s personality changes completely–and not in a good way. Even though the police rule the death as an accident, Lizzie immediately suspects foul play and senses a connection to the recent murder. She is determined to bring the killer to justice, but is having some trouble getting her Nancy Drew on thanks to the pesky stalker she’s picked up–Blake Morgan. Wait, didn’t she want him to follow her around and pay attention to her? Not like this. Blake has turned from cool and smooth to cold and downright scary, making Lizzie wonder if he should be next on her suspect list. 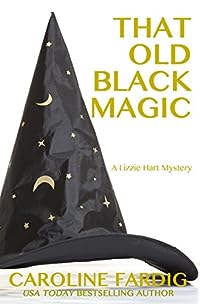 Lizzie Hart is back–snooping, lying, and chick-fighting to uncover the truth in this sequel to bestselling author Caroline Fardig’s It’s Just a Little Crush.

That Old Black Magic… will it put Lizzie under its spell?

Lizzie Hart hoped her first day back at work after nearly being killed would be uneventful. No such luck. Before she can finish her morning coffee, Lizzie and her co-workers find a dead body on the rooftop of their office. Media vultures that they are, the Liberty Chronicle employees are psyched to have first-hand news to report. Lizzie, however, is devastated when she realizes that the victim is her ex-boyfriend’s brother.

When evidence begins piling up against one of Lizzie’s friends, she reluctantly dons her detective hat once again, determined to find the real killer. She’s not thrilled about chasing another psychopath around, but she’ll do anything for a friend. Lizzie’s love life is rapidly becoming a hot mess, too. Her latest attempt at sleuthing isn’t leaving much time for her budding romance with town hunk Blake Morgan. Add that to the fact she’s hiding a secret so big it could rock the very core of their relationship, it’s no wonder that Lizzie’s in a tizzy.

Poor Lizzie ends up juggling a murder investigation, a wacky Wiccan coven, and two men vying for her attention–all while nursing injuries left over from the last time she decided to play Nancy Drew. It’s a good thing she always has a few tricks up her sleeve. 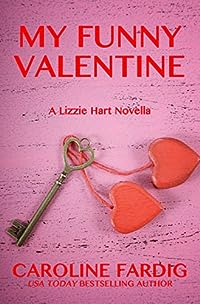 All Lizzie wants for Valentine’s Day is for her fiancé NOT to be the prime suspect in a murder investigation.

Is that too much to ask?

Lizzie Hart is finally living the dream. She’s engaged to the love of her life, Blake Morgan, and more importantly, she hasn’t even given a thought to dead bodies or murder investigations for an entire year. The only hurdle in Lizzie and Blake’s way to wedded bliss is introducing their polar opposite families to each other at their engagement party.

Blake’s parents have thrown a lavish shindig, but the fun is quickly over when Blake’s brother arrives with an unexpected guest, the woman who left Blake at the altar years ago. If that weren’t enough drama for one evening, Lizzie and Blake find the town mayor dead and the detectives on the case put Blake at the top of their suspect list.

It’s a race against the clock for Lizzie and Blake to find the real killer before the police decide to lock Blake up and throw away the key. 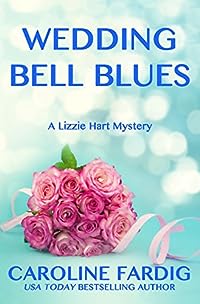 Lizzie Hart’s crazy love life has been leading up to this moment… when she finally gets to marry Blake Morgan. But with their luck, will they make it to ’til death do us part before the wedding even starts?

It’s June in the small town of Liberty, and that means it’s wedding season. Faster than you can say “I do,” the social height of the year turns deadly as a sadistic killer begins targeting couples on what should be their happiest day.

The terror begins as a groom keels over before he can get through his vows. The clever killer frames Bethany McCool, the dead groom’s ex, for the murder. Lizzie knows her friend Bethany is innocent, so she enlists the help of her fiancé, Blake, and sets out to find the real killer. But as the mayhem intensifies, the duo realizes they’re going to have to partner up with the police this time instead of trying to do all the sleuthing on their own.

As if they don’t have enough to do, Lizzie and Blake’s big day is fast approaching, and neither of them can wait to tie the knot. Lizzie’s domineering mother has taken over the planning for the wedding, but even she can’t hold everything together as one by one the florist, the baker, and the caterer start pulling out over safety concerns. With the string of violence threatening to ruin their happily ever after, Lizzie and Blake must rush to find the killer before they become the next victims.