Sam J. Fires’ exciting post-apocalyptic collection is high-octane action at it’s best. With gritty complex characters, these adrenaline-fuelled tales are sure to keep the pages turning and will leave you on the edge of your seat. Get your copy today! 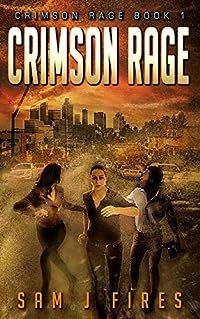 For Donna, this could be a welcome relief from her meaningless life. But first, she has a life to save.

As Los Angeles spirals into chaos, strangers quickly become allies when Donna encounters police officer Jane Benson and movie director wannabe, Eric Landers. Now, the three have no choice but to rely on one another if there’s any hope of surviving the apocalypse.

You’ll love this masterly start to the Crimson Rage series written by Sam J Fires as the stage is set for a heroic adventure of survival. 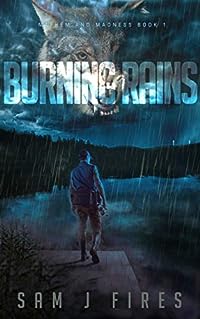 “If you like post-apocalyptic fiction with a dash of dark humor and irony, you will love Burning Rains!”

Cole Denvers – he’s on his annual camping and fishing trip, he’s set up camp on the shores of the Old Ridge Lake and is counting on catching some quality fish

But when the skies suddenly darken and the wolves begin to howl, Brook and Cole realise that the blissful break they were looking forward to is fast turning into an ordeal from hell.

As the nightmarish horrors clash around them, Brook and Cole find themselves thrown together. Now their only goal is to make it home alive. But with acid falling from the sky and wolves haunting their shadows, will the two be able to make it out of the mountains alive?

Sam J. Fires delivers dark humor with a touch of horror in this exciting book 1 in the Madness & Mayhem series. 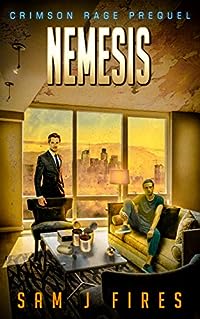 Who is Scott Chapman?

Scott’s just an ordinary nine-to-five guy with an ordinary family, trying to scrape a living. But his life’s about to get blown apart.

Desperate times call for desperate measures as Scott is compelled to accept a job offering the sort of money he’s never seen before in his life. But at what cost? The stakes are high and if you’re not careful, this can see you thrown in jail.

Scott’s a victim. It’s not his fault of course. He’s brimming with fury and needs to take revenge. He’s going to kill the guy who sent him to his jail sentence.

Little does Scott know he’s about to meet his Nemesis. And suddenly the world is thrown into a spin as the urban landscape is transformed and millions of people wiped out.

But Scott’s an opportunist and he sees an opportunity. Will this see him killed or will he escape with his life?

Nemesis is the prequel to the brand new thrilling post-apocalyptic Crimson Rage series. 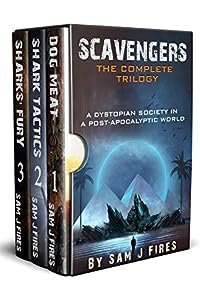 A young boy watches helplessly as his father is murdered, and the future is forecast.

The Heaps— Massive junkyards protected by brainwashed children and ruled over by “Heap Lords” with an iron fist. With their childhoods robbed of them, the brainwashed become “Heap Sharks”, and are now only violent pawns. When the world ended, the Heaps contained mankind’s last resources. They are impenetrable… and the young brothers Olly and Israel plan on robbing one.

The riches inside mean nothing less than the boys’ survival. They’ll need to outwit and defeat the savage Heap Sharks if they are to have a chance… and not get themselves captured in the process…

The end of the world brought with it a grotesque Darwinian doctrine. Man eats dog is the new law now. Can the brothers make it out of the Heaps in one piece—and what of their father’s violent death?

The Complete Trilogy Scavengers Series – all in this one, special edition and only $0.99!