If you are looking for a new western series that you will not be able to put down then look no farther than Loretta Jackson and Vickie Britton’s High Country Mystery series. These modern day Western stories have fast paced stories with plot twists and turns that will keep you on the edge of your seat. Enjoy! 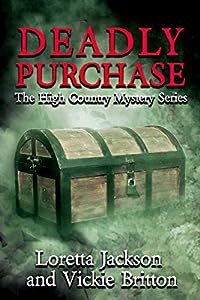 Buyer beware. To create excitement, Ruger, a shady dealer at the annual rendezvous flea market, puts up for auction a locked Civil War trunk with contents to be sold sight unseen! That night, the highest bidder, Zeke Jones, is found stabbed to death beside the trunk. Sheriff Jeff McQuede believes Jones has interrupted a robbery in progress. Several people had offered to buy old coins, photos, and medals from him, which indicates to McQuede that Jones had already sold what the robber had been after. Acts of vandalism follow as the thief continues his ruthless search. Baffled, McQuede must beat the killer to a treasure he can’t even identify. Fear spreads throughout the Black River Rendezvous as McQuede tries to discover the secret behind the mysterious trunk before another murder occurs.

Wyoming Winters can be Murder!

In the heart of a raging blizzard Sheriff Jeff McQuede discovers a woman frozen to death in her car. At first he believes her death to be an unfortunate accident–until he finds clues that point to cold-blooded murder. Margaret’s husband, Arthur, left her in the stalled vehicle to brave the storm and manages to reach Joe Trevino’s isolated ranch. The case becomes more complicated because of the recent warehouse robberies at Trevino’s store. McQueede finds that Trevino is Margaret Burnell’s business partner, and that she has traveled from their Casper store to conduct a company audit. In addition, Margaret has planned to meet with her only child, a run-away daughter she hasn’t seen in years. Trevino, the missing daughter, and Arthur Burnell would all profit financially from Margaret’s demise. Has a relentless killer tracked and sabotaged the Burnells, or did Arthur simply abandon his wife for his share of the money, leaving her to die an icy death? 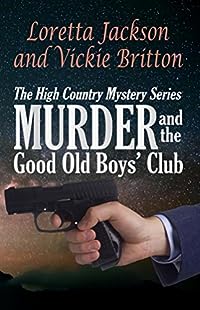 Threatened victim, waiting grave… Sheriff McQuede is called to the cemetery by Ben Ward, a member of Durmont’s Good Old Boys’ Club. Ward’s tombstone, where he plans someday to be buried with his first wife, is vandalized. A menacing date of death, fast approaching, has been drilled into the stone, and splotches of red paint drips over it like blood. Ben Ward and his four partners have sunk vast sums of money into a recreational community, Pleasant Valley Retreat, and this failing project has flamed anger among the investors. As the inscribed date of Ward’s death draws nearer, a killer stalks the resort. McQuede must act quickly before a vandal’s threats turn into reality.

The famous Carlo painting Stealer of Horses sells for cash in a small Wyoming town and gallery owner Sheldon Spence gives the $200,000 to his wife, who walks over to the bank to make the deposit… and never returns.

A witness claims to have seen a frightened-looking Susan Spence in a battered old Chevy, speeding out of town. And each succeeding clue reveals a different angle on her disappearance. Sheriff Jeff McQuede begins to wonder if this is more than a simple case of kidnapping and robbery. Was Sheldon involved in Susan’s disappearance? Or did Susan and a lover fake the scheme, planning to run off with the money they stole from Sheldon? The identity of a victim found shot behind the wheel of the Chevy holds the key to one ominous question: Is Susan Spence a kidnap victim — or is she part of some sinister ploy? 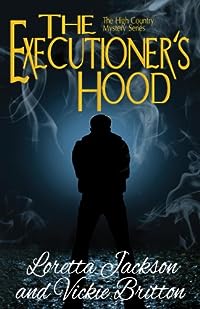 When Sheriff Jeff McQuede finds Durmont’s highly respected judge, Phil Grayson, bludgeoned to death in his study, a black executioner’s hood shoved over his head, he faces his toughest case yet.

The judge has many enemies, including Darin Keefe, sentenced by Grayson and just released from prison. McQuede soon finds out that Keefe’s case is linked to a city scandal that may involve Grayson. Seven years ago the judge’s best friend, John Harwood, was believed to have taken a bribe from Keefe Construction and to have committed suicide rather than face conviction.

Had Keefe, taking the fall, left prison intent on revenge?

Is the judge’s murder a simple burglary gone wrong or a case of modern-day vigilante justice?