Looking for historical fiction that will transport you to another time and place? One with the sweep of a Doctor Zhivago and Gone with the Wind? This collection by James Conroyd Martin is sure to enthrall history lovers. Enjoy! 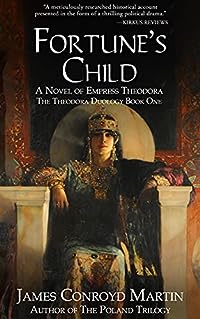 From a very young age, Theodora, daughter of a circus bearkeeper in Constantinople, sets her sights well above her station in life. Her exquisite beauty sets her apart on stages and in the eyes of men.

Stephen, a Syrian lad of striking good looks, is sold by his parents to a Persian wizard, who teaches him a skill in languages that will serve him well.
By the time Destiny brings them together in Antioch, Theodora has undergone heart-rending trials and a transformation, while Stephen has been sold again… and castrated.
Discover the enduring bond that, however imperfect, prompts Theodora — as Empress — to request palace eunuch Stephen to write her biography.

“A historical novel set in sixth-century Constantinople charts the extraordinary ascent of a woman from poverty to royal power. In this ambitious novel, the author vividly brings to life the cinematic story of Theodora’s life, chronicling her rise, more halting than meteoric, to spectacular power. Martin’s command of the historical period — not just the chief political events, but also the nuances of its cultural mores — is masterful. Furthermore, he conjoins that scholarly rigor with novelistic excitement — the entire tale is intelligently conveyed with great emotional poignancy. a meticulously researched historical account presented in the form of a thrilling political drama.” KIRKUS REVIEWS

“Martin not only unfurls the vast canvas of history, but he paints the deeply personal side of the men and women who lived it. His settings and characters come to life in meticulously researched detail. I felt like I was there.” — Lisa Wingate, New York Times Bestselling Author of Before We Were Yours

“A treasure for historical fiction fans — richly detailed, immersive, and heart-pounding. Martin paints a vivid and satisfying portrait of one of history’s most remarkable women.”
-Olivia Hawker, bestselling author of The Ragged Edge of Night 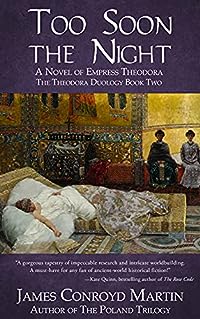 Too Soon the Night: A Novel of Empress Theodora (The Theodora Duology Book 2)
by James Conroyd Martin

Palace eunuch and secretary Stephen records Empress Theodora’s life as she navigates wars, political and religious crises, a citywide rebellion, and the first world plague pandemic, all in a male-dominated world.

“A gorgeous tapestry of impeccable research and intricate worldbuilding.” ~Kate Quinn, Author of The Empress of Rome Saga and The Alice Network 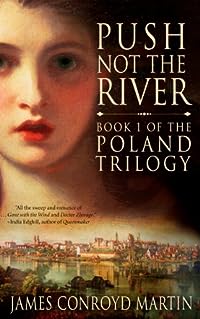 One chooses love and patriotism~the other, deceit and treason.

And yet~love binds them even as their country hurtles toward the abyss.

Suddenly alone in the world, Anna falls prey to the schemes of Cousin Zofia even as she falls in love with Jan, a patriot ready to put his life on the line for Poland’s Constitution. Zofia refuses to submit to an arranged marriage and will go to any lengths to avoid it, no matter who it may hurt.

Based on a true diary, “Push Not the River contains all the sweep and romance of the classic romantic epics, such as Gone with the Wind and Doctor Zhivago, with a heroine who remains strong in the face of both personal and political tragedy… Anna Maria’s story is at once timeless and timely.” –India Edghill, author of Queenmaker and Delilah

A panoramic and epic novel in the grand romantic style, Push Not the River is the rich story of Poland in the late 1700s–a time of heartache and turmoil as the country’s once peaceful people are being torn apart by neighboring countries without and divided loyalties within. At the vulnerable age of seventeen, Lady Anna Maria loses both of her parents and must leave to go to live with relatives, thrusting her into a world of love and hate, loyalty and deceit. Even kind Aunt Stella, Anna’s guardian who personifies Poland’s courage and spirit, can’t protect Anna from the uncertain future of the country.

Anna turns to love and comfort in Jan, a brave patriot and architect of democracy, unaware that her beautiful and enigmatic cousin Zofia has already set her sights on the handsome young fighter. Thus Anna walks unwittingly into Zofia’s jealous wrath and darkly sinister intentions. Surviving several tragic events, some orchestrated by the crafty Zofia, a strengthened Anna learns to place herself in the way of destiny–for love and for country. Heeding the proud spirit of her father, Anna becomes a major player in the fight against the countries who come to partition her beloved Poland.

Push Not the River is based on the eighteenth-century diary of Anna Maria Berezowski, a Polish countess who lived through the rise and fall of the Third of May Constitution. Vivid, romantic, and thrillingly paced, it paints the emotional and unforgettable story of the metamorphosis of a nation–and of a valiant and resilient young woman. 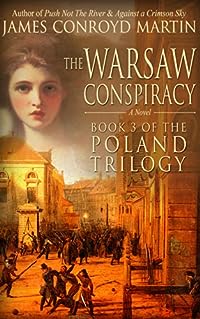 Engaging and opulent, The Warsaw Conspiracy unfolds as a family saga set against the November Rising (1830-31), partitioned Poland’s daring challenge to the Russian Empire. Brilliantly illustrating the psyche of a people determined to reclaim independence in the face of monumental odds, the story portrays two brothers and their fates in love and war. Michal is a seasoned veteran soldier, cautious of the evolving conspiracy; Jozef, his much younger brother and impassioned cadet, finds himself caught up in the vortex of a daring plot to abduct the Grand Duke of Russia. With Siberia or emigration to France looming as heart-rending contingencies, matriarchs Anna and Zofia stay steadfast in their resolve to steer the clan through ever-muddying waters.