The Bite Somebody Series by Sara Dobie Bauer

“BITE SOMEBODY is sexy, funny, and A-positively alive with colorful characters. Celia is perfectly imperfect and insecure; adorable sexy human, Ian, sparkles more than any undead ever could; and Imogene is the kind of bad-influence friend we all need in our lives. Bursting with tasty giggles, devilish guffaws, and swoony sighs, BITE SOMEBODY is an absolute pleasure to sink your teeth into.” — Jennifer Scott, author of The Accidental Book Club 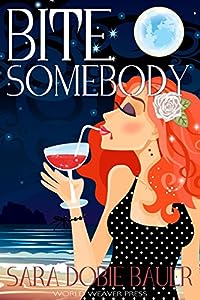 Bite Somebody
by Sara Dobie Bauer

“Do you want to be perfect?”

That’s what Danny asked Celia the night he turned her into a vampire. Three months have passed since, and immortality didn’t transform her into the glamorous, sexy vamp she was expecting, but left her awkward, lonely, and working at a Florida gas station. On top of that, she’s a giant screw-up of an immortal, because the only blood she consumes is from illegally obtained hospital blood bags.

What she needs to do — according to her moody vampire friend Imogene — is just… bite somebody. But Celia wants her first bite to be special, and she has yet to meet Mr. Right Bite. Then, Ian moves in next door. His scent creeps through her kitchen wall and makes her nose tingle, but insecure Celia can’t bring herself to meet the guy face-to-face.

When she finally gets a look at Ian’s cyclist physique, curly black hair, and sun-kissed skin, other parts of Celia tingle, as well. Could he be the first bite she’s been waiting for to complete her vampire transformation? His kisses certainly have a way of making her fangs throb.

Just when Celia starts to believe Ian may be the fairy tale ending she always wanted, her jerk of a creator returns to town, which spells nothing but trouble for everyone involved. 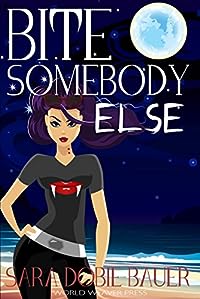 Bite Somebody Else
by Sara Dobie Bauer

Imogene helped her newbie vampire friend Celia hook up with an adorable human, but now Celia has dropped an atomic bomb of surprise: she has a possibly blood-sucking baby on the way. Imogene is not pleased, especially when a mysterious, ancient, and annoyingly gorgeous vampire historian shows up to monitor Celia’s unprecedented pregnancy.

Lord Nicholas Christopher Cuthbert III is everything Imogene hates: posh, mannerly, and totally uninterested in her. Plus, she thinks he’s hiding something. So what if he smells like a fresh garden and looks like a rich boarding school kid just begging to be debauched? Imogene has self-control. Or something.

As Celia’s pregnancy progresses at a freakishly fast pace, Imogene and Nicholas play an ever-escalating game of will they or won’t they, until his sexy maker shows up on Admiral Key, forcing Nicholas to reveal his true intentions toward Celia’s soon-to-arrive infant.