The hugely entertaining John Kite series by Stuart Doughty is action-packed with a touch of wit, and fun and interesting strong characters. A series definitely not to be missed. Enjoy!

The Art of Danger (John Kite Book 1)
by Stuart Doughty

Can an old painting be a dangerous weapon? You’d better believe it! In this action-packed crime-thriller – with a touch of wit – tough ex-cop and firearms specialist John Kite, whose job is to recover stolen art, is up against a foreign spy planning havoc and mayhem, not an art show. To complicate matters, Kite’s being followed by a kooky – and sexy – young woman. Where does she fit in? Even worse, Kite’s got a shameful secret in his past that he thinks is well hidden – until he realises someone’s on to it. What Kite is chasing down isn’t just a painting: it’s the most explosive art in the world. Can he stop the impending cataclysm? “I can’t tell you how much I enjoyed it. A treat. I’m a fan. A hugely entertaining story. Characterisation is superb.” (Crime writer E V Seymour)

A politician’s lie leads to the biggest art heist since World War II. The Government turns to PI John Kite for help as unexplained demonstrations in museums cause a riot on social media. Ex-cop Kite tracks down a corrupt billionaire chasing ultimate power, saves a young girl from certain death and encounters a killer from his own troubled past. Kite himself is pursued by the police, but, with a cool and beautiful woman as his ally, he fights on to unmask a traitor. Meanwhile a mammoth bonfire is prepared: what or whom is meant to burn on it? Kite can use wit, as well as a gun, but is it too late to save the country’s leader and his government?

Pictures To Die For (John Kite Book 3)
by Stuart Doughty

Mayhem in Florida and murders in Europe. If a billionaire wants something badly enough, who can stop them getting it? Especially when his accomplice is an obsessive criminal. In this fast action thriller – with a touch of wit – it’s art detective John Kite’s job to nail the dangerous and mystifying thieves who steal paintings – then destroy them. Kite criss-crosses the world to save millions of dollars’ worth of art from destruction as a beguilingly sexy, and kooky, ex-cop re-enters his life with problems of her own she wants him to solve. 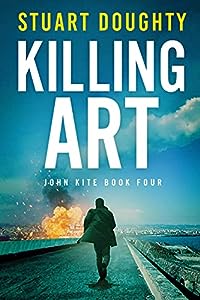 “China is killing art,” a woman tells PI John Kite. “You must stop them.” Then she is killed in a hail of bullets. Is the bizarre message connected to the flood of robberies Kite is investigating? Or to the dead auctioneer found floating in the ocean? Or is it evidence of a world-wide conspiracy? Being shot at with a flare gun is just the start of this action-filled adventure for ex-cop John Kite. His quest for answers takes him on a 1500 mile road chase, and a speedboat pursuit across the Mediterranean. A girlfriend tells Kite he is “too dangerous to know”, but his signature sense of humour is undimmed. With a volcano ready to blow its top, can Kite stop the conspiracy before it causes western economies to go into melt-down ?