If you like sweet contemporary romance in a small town ranch and farm setting, life-altering surprises, and second chances, you’ll love the Seven Virtues Ranch Romance Series. So come sit a spell in Plumwood Hollow where life happens a little slower and sweeter, but hearts might just be a little bigger. Hometown heroes. Heartfelt romance. Happily ever after. Enjoy!

Can a small-town cowgirl and a big-time city boy find their way back to a second chance at happily ever after?

Faith Goodacre has had to overcome major obstacles to save her family and bring Seven Virtues Ranch back from the brink of disaster.

So when her high school sweetheart shows up hoping to win back her heart – oh, and he’s bought the ranch next door – her carefully ordered world she’s worked so hard to build threatens to implode.

Cordell Overman is back, and he’s ready to face his past and make things right. But he’s got a whole town to convince that this time around, he’s here to stay. 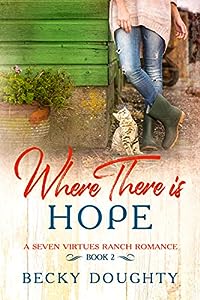 Where There is Hope: A Small Town Romance Series About Sisters (Seven Virtues Ranch Book 2)
by Becky Doughty

Doc Hope is the woman to call when your pet is ailing, your cow stops eating, or your horse goes lame.

Because she understands animals a whole lot better than she does people; that’s for sure. She’s sworn off men in particular since her husband walked away from their marriage a few weeks before their second anniversary.

She should have seen it coming – his leaving. Apparently, everyone else did. But Hope… well, Hope hoped.

Levi Valiente is exceptionally skilled with a curved blade and a bone saw, the tools of his trade as the local butcher.

He’s also a good man, a great dad, and he knows how to treat the women in his life. Except, perhaps, for his wife, who walked out on their family a few months before their daughter’s first birthday.

But Levi’s tired of hiding his great big heart behind the shield of self-doubt he carries, and he’d like to believe that where there’s Doc Hope, there’s a good chance of happily ever after, too.

Hope, however, might take some convincing. The strong, silent, single father is a longtime family friend, and with her track record, she’s sure she’ll just mess things up for everyone. 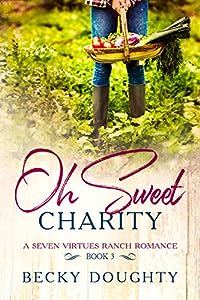 When the ghost of her husband appears in the haunted eyes of a wounded soldier, Charity wants no part in bringing either of them back to life.

Besides, she’s too busy building her business, pouring her heart into the meals she caters to her growing list of clients.

Frank Banner has come home to Plumwood Hollow and Whispering Hills Ranch to recover from a failed reconnaissance mission in the Middle East. They managed to save his legs, but Frank seems to have lost his footing.

The girl next door may be the only one who really understands what he’s going through.

There’s only one problem. She’s willing to cook for him – it’s what she’s paid to do – but that’s about it.

Charity has forgotten the old adage, though: The way to a man’s heart is through his stomach.

The Heart of Courage: A Small Town Ranch and Farm Romance about Sisters (Seven Virtues Ranch Book 4)
by Becky Doughty

No woman should have to choose between the man she loves and the sister she can’t live without.

Being a twin has always been the best part about being Justice’s sister. But Courage is starting to wonder if it’s the one thing standing in the way of them figuring out who they really are. Their trick riding show has become far more popular than they’d ever imagined, and Courage must decide whether or not she still wants to be the other half of The Twisted Sisters.

Loving someone should be simple, uncomplicated. It should fill the empty places and not leave you wanting. Courage used to believe that, but she’s finding out the hard way that sometimes love is fraught with sacrifice and yearning, and it can burn its own brand of pain on even the bravest of hearts.

When the twins are tested by their greatest fear, will the bond they share bend and stretch, or will it break? Will Courage choose to set aside her own desires just to keep the peace? 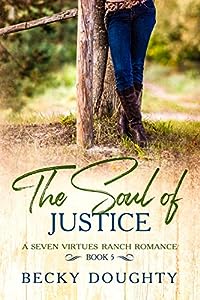 When one terrible crime of the heart wreaks havoc in the lives of those she loves, Justice must find the courage to face the consequences of her actions.

Justice Goodacre and her twin sister, Courage, have performed together as the Twisted Sisters for more than a decade, but now the rodeo trick riding dynamic duo has split up, and Justice is going solo for the first time. She doesn’t mind riding alone; the arena isn’t what scares her.

It’s what happened last summer that keeps her hat tipped low and her eyes on the ground.

And then there’s Brandon Stillwater, the love of her life, who is no longer sure if he can trust her with his heart, and now he’s making plans for a future that might not include her.

Her reputation at stake, both in the arena and back home at Seven Virtues Ranch in Plumwood Hollow, Justice must perform a cross-examination of her very soul before she can find her place in a world that no longer seems quite so black and white.

Will Justice find redemption, or will the verdict be guilty as charged?