If you love stories about witches, magic, and talking cats and dogs, all spiced up with a dollop of danger, you’ll love following along with Mpenzi and Felix, her shape-shifting sidekick, as they fight the good fight against evil in the small French seaside town of Beaucoup-sur-Mer. Enjoy! 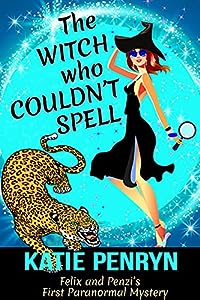 Mpenzi’s a new witch in a new town.

Her long-lost mother’s been locked up for murder.

What should she do? Find the real killer – however dangerous that may be.

So far, Mpenzi’s done well. Despite her reading disability, she’s qualified as a lawyer in London and raised her two brothers on her own. But she doesn’t have the skills to hunt down a murderer.

True Mpenzi’s a white witch, so she could use magic, and she does have her mother’s Book of Spells, but she’s hit a stumbling block. Try as she may, Mpenzi cannot decipher the grimoire’s medieval script. She needs help desperately if she’s to save her mother from a life in prison.

Will the High Council of the Guild of White Witches listen to her plea and allow her an assistant in time to free her mother? An assistant with supernatural powers of their own? 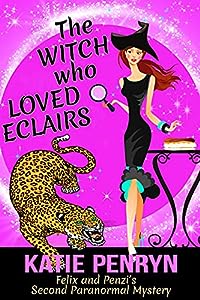 The local bakery explodes in the middle of the night.

Mpenzi Munro and her family are settling down to their new life in the French seaside town of Beaucoup-sur-Mer. At last, Penzi can find out what treasures are stored in the antiques shop attached to their centuries old house on the edge of the Atlantic Ocean.

However, evil is never far away, even in a quiet little town like Beaucoup-sur-Mer. It’s not long before Penzi receives an urgent phone call from the mayor, Monsieur Bonhomie, asking her to help him with his latest crisis. Felix, Penzi’s multi-talented and sexy bodyguard, tries to stop Penzi from taking up the challenge, but Penzi is a newly committed white witch who says, “A witch has to do what a witch has to do.”

So, family life is put on hold again while Penzi adds to her portfolio of spells in her fight to bring the murderer to justice.

The Witch who Got the Blues: Felix and Penzi’s Third Paranormal Mystery (French Country Murders Book 3)
by Katie Penryn

What do you get when you cross a bad-boy blues guitarist with a town full of folk bent on revenge?

When Jonny Sauvage, sexy blues guitarist from New Orleans, goes on tour in France with his band, he makes a return trip to the small seaside town of Beaucoup-sur-Mer. Golden lad and classic bad boy, he’s happy to play his music and sow his wild oats everywhere he can.

Penzi, the resident white witch and champion in the fight of good against evil, may like him, but not everyone’s a fan. First there’s the mayor, who catches him cozying up to his daughter. Then there are the townsfolk, still smarting from his antics when he last blew into town. And if that wasn’t enough, his girlfriend and band members are sick of being messed around, too. Beneath the surface charm, it seems, Jonny’s still a spoiled, self-absorbed, and conniving young man.

But karma has a way of catching up with people like Jonny. And when it does, it falls to Penzi to restore equilibrium using her innate intelligence and newly acquired magic skills.

It’s good luck to find a pearl. Or is it?

This one leads to murder.

White witch Mpenzi Munro thinks herself lucky when she finds a beautiful pearl in her lunchtime oyster. Her friend Izzy suggests they visit the oyster farm from which the pearl came. She has no idea she is launching Penzi and Penzi’s shape shifting bodyguard Felix on a perilous investigation into the murky history of a region torn by war throughout the ages.

Penzi’s self-confidence falters when she stumbles upon a second dead body, but with Felix and her friends Izzy and Garth beside her, she adds the wisdom her lucky pearl brings her to her developing skill as a white witch and surges ahead in her determination to bring the perpetrators to justice. 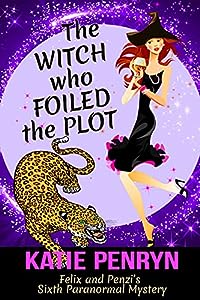 The vines are dying.

Dogs and children are being attacked.

Just when Felix thinks he can keep Penzi out of danger, a vicious criminal rocks the boat.

With enough to live on for the rest of their lives, Penzi and Felix no longer need to work for a living. However, when evil comes knocking at the door again, Penzi once more has to choose whether to take up the fight for good or sit back and enjoy the safety of her new-found wealth.

Her friends, who own vineyards and a distillery in Cognac, have fallen foul of the powers of greed and wickedness.

Well, you know our Penzi. What do you think she’ll do? Let it go, or throw herself into the battle?