Cult of Darkness by D.W. Whitlock

In this riveting adventure thriller, D.W. Whitlock explores the darker aspects of the human soul and the struggle to do what’s right in a shadowy world defined by violence and death. 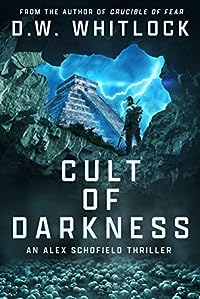 Cult of Darkness
by D.W. Whitlock

A seaside paradise. An endless war. Everyone pays in blood.

The cartels in Mexico have splintered, triggering violent conflict over control of the illicit drug trade. One has risen to power above all others with its brutal methods: The Riviera. Led by a shadowy figure known only as Kukulkan, this powerful cartel has become the main source of Fentanyl, a synthetic opioid fifty times more potent than heroin. As mutilated bodies appear on the pristine white sands of local beach communities, investors fear for the worst… their time of peaceful prosperity has come to an end.

When the only son of a wealthy family goes missing in the heart of Mexico’s Yucatan Peninsula, Alex Schofield is sent in to find him. A highly trained ex-Delta soldier, he’s the best man for the job. There’s only one catch: he has sworn to never kill again.

Amid the escalating conflict, a darkness grows among the dense forests and Maya ruins. As the search brings Schofield closer, he must confront his own violent past and decide if bloodshed is once again, the only way.