The Angels & Patriots Series by Salina B Baker

Salina B Baker is a multiple award winning author and avid student of Colonial America and the American Revolution. Her lifelong passion for history and all things supernatural led her to write historical fantasy. With her passion for history and the accurate portrayal of the period, Baker brings history to harsh, vivid life. Enjoy! 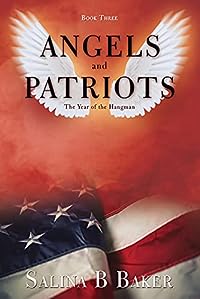 The Year of the Hangman

They ominously call 1777 The Year of the Hangman because the sevens resemble the grisly gallows. Together, George Washington, the Continental Army, Archangel Colm Bohannon and his brotherhood of fallen angels face a triple threat more perilous and harder to discern than the symbolism of consecutive sevens.

As British General William Howe sweeps toward the nation’s capital of Philadelphia and British General John Burgoyne thunders down the Lake Champlain corridor toward Albany, New York to cutoff New England from the other colonies, God unleashes a dark feculent army to kill the brotherhood of disobedient angels after His legions of demons failed to do so.
Who will be victorious and who will be brought to their knees? 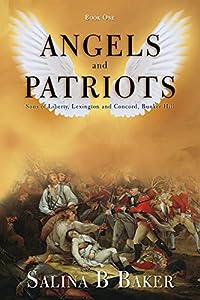 Angels & Patriots: Book One
by Salina B Baker

Salina B Baker’s Angels & Patriots series is the recipient of fourteen awards in Fantasy, Historical, and Military Fiction

Angels & Patriots is the violent struggle for freedom, played out on the battlefield and the firmament as the angels fend off the demons in a quest to serve both humans and God.

On the eve of the Revolutionary War, American patriots are leaving their homes and families behind to stand firm against the British. What these early Americans do not realize, is that while they prepare themselves for their battles, a war is simultaneously playing out among the soldiers–one that poses a far greater threat to their lives and souls.

Demons that God created to kill a brotherhood of fallen angels are fanning the embers of the Revolutionary War to draw the angels out of hiding. They walk and fight alongside patriots and British soldiers alike.

Archangel, Colm Bohannon, leads his angel brothers to Boston to track down the demon leader and to warn John Hancock, Samuel Adams, Dr. Joseph Warren, and the Sons of Liberty that the British army is not their only threat. The patriots will need to engage with two enemy forces on the battlefield. As it stands, the band of angels is road weary and struggling with infighting and earthly temptations. Is faith a strong enough shield to fight off demon attacks and protect the patriots?

Angels & Patriots is the violent struggle for freedom, played out on the battlefield and the firmament as the angels fend off the demons in a quest to serve both humans and God.