The Betrayal by Cole Baxter

She thought she could escape the past. But now it’s found her… The Betrayal by Cole Baxter. A gripping psychological thriller perfect for fans of Freida McFadden, Daniel Hurst, K L Slater. 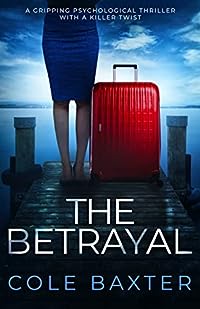 The Betrayal
by Cole Baxter

Erin is determined to begin a new chapter in her life. Having freed herself from her violent and abusive ex, she’s starting over on a remote island where she can lead a peaceful, quiet life.

But then she meets Dominic. He is pushy and won’t take no for an answer. Given her history, Erin feels nervous of him – how far will he go to get what he wants? Even worse, Erin discovers her ex-husband has been released from prison. Will he come after her again?

And her terror only increases when it becomes clear there is a killer loose on the island.

Refusing to live in fear any longer, she devises a dangerous plan to unmask the killer. But in so doing she stumbles across the deadly secret at the heart of this island community, a discovery more terrifying than anything she could ever have imagined…