The legend of Tal Harrenfel is sung across the Westreach — and with each telling, the tales grow taller. But though he’s declared a hero by his king, Tal has never claimed to be more than a man… Name of the Wind meets Witcher in A King’s Bargain, an intertwining sword and sorcery adventure and coming of age tale. If you like The Wheel of Time, The Dragonbone Chair, or The Stormlight Archive, you’ll love the captivating world of Legend of Tal.. Begin the best-selling epic fantasy series called by readers “brilliant,” “captivating,” and “a masterfully crafted adventure.” 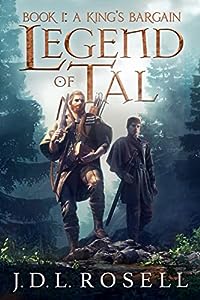 After three decades of fighting warlocks, killing mythical beasts, and hunting enchanted treasure, Tal has had enough. Running from the deeds of his past, he retreats to his home village under a different name and meets an unlikely companion: Garin, a village boy who dreams of making a name for himself and seeing the world beyond their sleepy town.

When Tal receives a mysterious visitor, both he and Garin are thrown into a journey across the kingdom. Soon, they become embroiled in the plots of monarchs, on the frontlines of an ancient war, and at the mercy of a fabled sorcerer.

Now Tal must live up to his legend, and Garin discover his own power, to survive the forces pitted against them… 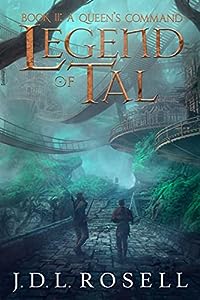 The best-selling series continues in Book 2, A QUEEN’S COMMAND.

The legend of Tal Harrenfel lives on, and a new song spreads across the Westreach. But though Tal and Garin overcame one enemy, victory promises to be short-lived…
Garin struggles with his inner demons. Tal is haunted by enemies and memories alike. And a long-kept secret has torn a rift between them.

But circumstances force them to continue their travels together. The roads from Avendor to Gladelyl, once the safest in the Westreach, are rife with danger. And Tal is bound to the commands of the Elf Queen whose intentions are unforeseeable.

But reaching the elven realm is only the beginning of their troubles, for Gladelyl is in turmoil. The nobles grasp for power. The underclass and Eastern immigrants seek new rights. And an ancient enemy takes advantage of the chaos to turn them all against each other.

Now Garin must come to terms with his demons, and Tal must overcome threats both past and present, before civil war tears the elven realm apart…
The Legend of Tal series continues in Book 2, A Queen’s Command. 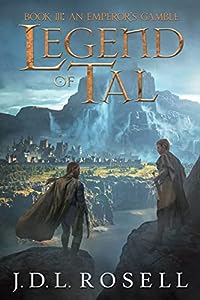 An Emperor’s Gamble (Legend of Tal: Book 3)
by J.D.L. Rosell

The best-selling series continues in Book 3, AN EMPEROR’S GAMBLE.

The legend of Tal Harrenfel has a new, dark chapter to its legacy, and its hero quests alone into the East. But though Tal intends to end Yuldor’s war himself, Garin and their companions follow closely on his heels…
Elendol is in ashes, and its queen has been replaced by one sympathetic to the East. Fleeing the destruction left in his wake, Tal leaves behind all those he loves in an attempt to save them from further harm. His aim is simple: find Yuldor and claim the Worldheart from him, no matter the cost.

But Garin and the others won’t let Tal sacrifice himself so easily. Setting off in pursuit, they intend to offer what help they can. But not all the company’s aims are the same…
The East is fraught with imposing challenges, formidable monsters, and dubious allies. And survival is only the beginning — for its emperor has a scheme in mind that may throw the world off its axis…
The Legend of Tal series continues in Book 3, An Emperor’s Gamble. 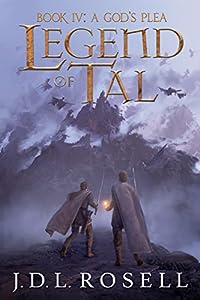 The best-selling series concludes in Book 4, A GOD’S PLEA.

The legend of Tal Harrenfel has reached its final verse. But though Tal has embraced his gifts, and Garin has discovered his own, their greatest trials lie ahead…
Tal, Garin, and their companions begin their approach to Ikvaldar, the mountain atop which the immortal sorcerer Yuldor waits. Before they can challenge Yuldor for the Worldheart, however, they must first overcome Ikvaldar’s formidable defenses.

Their quest will carry them into the heart of enemy territory. There, they will encounter their deadliest foe yet, one who may eclipse even Tal’s towering potential.

The last battle is near. The legend is at its end. For Tal and Garin to remake the world, it will require sacrifice beyond their imagining…
The Legend of Tal series ends with Book 4, A God’s Plea.