A killer, silent for ten years. Now he’s back. The Devil’s House by J.M. O’Rourke is the first in the gripping crime series featuring DS Jack Brody. Grab your copy TODAY! 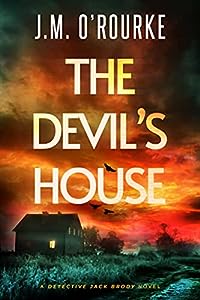 Ten years ago, three teens were murdered at a summer party in sleepy little Meadowstown. One of their friends was convicted of the murders and has been in a mental hospital ever since.

But now items are turning up which could have only been taken from the victims on that fateful night. Is it possible there was more than one killer? Or has the wrong person been convicted?

Det Sergeant Jack Brody of the Major Crimes Investigation Unit is sent to investigate. And comes up against apathetic local police who are determined to resist his every move.

Brody isn’t easily deterred. He pushes hard and becomes convinced the murderer is still out there, is stirring back to life, preparing to choose another victim. Brody summons the rest of his team, and they race to find the killer before he or she can strike again.

But this little town has some very dark secrets, and as Brody begins to uncover the horrifying truth, he realises that no-one here is safe, that even he and his team may be in terrible danger…