There can be no victory without sacrifice. No courage without fear. No freedom without heroes to defend it. This is a time for heroes. A time for war. A time for the Starship Freedom to light the darkness. Battlestar Galactica meets Starship Troopers in this sci-fi adventure from Daniel Arenson, the USA Today bestselling author of Earthrise. Grab your copy today! 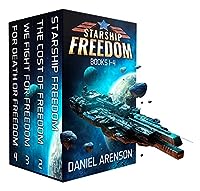 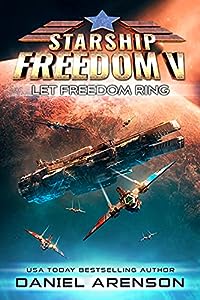 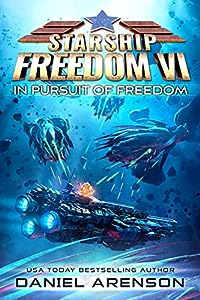 In Pursuit of Freedom (Starship Freedom Book 6)
by Daniel Arenson

The Aeolians. The galaxy’s most mysterious aliens. For a million years, they’ve been hiding. No human has ever seen them.

James King, commander of the starship Freedom, travels to their secluded world. He seeks to forge an alliance. To learn from the Aeolians their ways of war.

According to myth, the Aeolians once defeated the predatory rahs, alien spiders who are plaguing Earth. Aeolia’s secrets can save humanity.

But King soon learns that Aeolia harbors more secrets than he ever imagined. The Aeolians seem friendly at first… but not entirely honest. Something terrible happened to these aliens. Something they will not speak of. As Aeolia’s secrets begin to unravel, so might the galaxy itself… 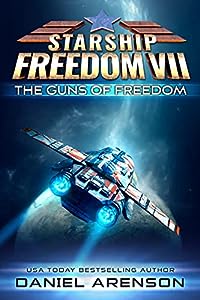 The Guns of Freedom (Starship Freedom Book 7)
by Daniel Arenson

War flares between man and monster. Between Earth and the terror from the stars.

We did not choose this war. The spiders attacked us. They trapped us in their webs. They devoured millions.

No, we did not want this war. But we will win it!

The starship Freedom rises. A legendary ship. A beacon of hope. A pillar of flame in the darkness. The fleet rallies behind her. All eyes gaze up at her light.

Admiral James King leads the fleet to battle. He knows the stakes. Earth teeters on the edge of destruction. He must muster all his courage, all his skill. Or Earth will fall.

This is an hour of war. An hour of spiders. An hour of courage and sacrifice and blood. This is Freedom’s finest hour.

A Time for Freedom (Starship Freedom Book 8)
by Daniel Arenson

The final battle is here.

The final stand of the starship Freedom. The final hope of Earth.

Two galactic civilizations face off. On one side — the rahs. Arachnid predators from deep space. On the other side — humanity. Us.

We have been fighting for years. Millions sacrificed their lives to bring us this far. Cities fell. Starships burned. Nations shattered. But we are still standing. Still fighting.

The greatest battle begins. Only one species can survive. It is a war between man and spider. Between hope and despair. Between freedom and tyranny.

The fleet is ready. The cannons are loaded. The soldiers stand tall. In this last battle, we will fall into the shadows of history… or our victory will shine for a million years.

The Freedom rises. She is our hope. Our flagship. Our light in the dark. She flies to battle… one more time.