The Concierge by Miranda Rijks

They hired an assistant to help them. But she has other plans. The Concierge by Miranda Rijks is the stunning psychological thriller from the best-selling author of The Visitors, The Arrangement, The New Neighbour. Grab your copy TODAY! 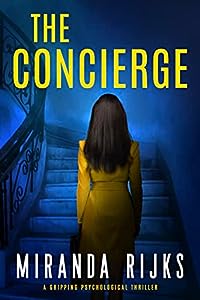 The Concierge
by Miranda Rijks

High-flying duo Goldie and Braun Delucci run a major film production company. But recently their gilded lives were touched by tragedy when one of their leading actors, Ally, died in a car crash.

What the Deluccis don’t realise is that their newly hired private assistant is actually Ally’s sister. Simone is convinced Ally’s death was suspicious and she is determined to find out what happened on that terrible night.

Simone’s new job puts her at the heart of a rich, dysfunctional family. As she digs for the truth about Ally’s death, she realises someone is watching her. And they want her gone.

That just makes Simone more determined to discover whatever terrible secret the Deluccis are hiding. But she doesn’t understand she is about to uncover something so dark, so shocking that her own life may never be the same again.