The Schemes Of Men

If you want to read an excellent fantasy series that you will get caught up in and carried along for the ride then The  Magic of Dimmingwood series by USA Today Bestselling Author C. Greenwood is the perfect choice. Enjoy! 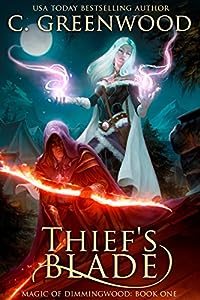 Blessed. Betrayed. Imprisoned. The captive has escaped and he wants revenge…

Luka’s carefree existence as the spoiled son of a minor noble ended the day his family was arrested and imprisoned in the Eyeless Tower. His father, a political rival to the praetor of Camdon, would never live to see freedom again. Luka should have joined his father on the scaffold but fate – or the schemes of men – intervened. Escape came.

Now Luka has a chance to thwart his persecutors and avenge his family. Beginning life again in a distant province, he takes a new name – Rideon. But the past he left behind won’t stay buried. His father’s old foe is determined to destroy him. Rideon finds help, only to discover a sinister purpose drives his mysterious allies. His new weapon seems to be cursed by an evil spell. Worst of all, he has offended a powerful faction within the city of Selbius. The treacherous thieves’ guild is out for his blood and their cunning thief king won’t be satisfied until Rideon feels the wrath of his infamous blade.

The only whisper of hope seems to come from the shadows of far away Dimmingwood. But can Rideon reach that haven, protect his young brother, and dodge all foes until his day of vengeance comes? Or will the traitors, thieves, and magickers surrounding him finish the deadly work his enemies began? 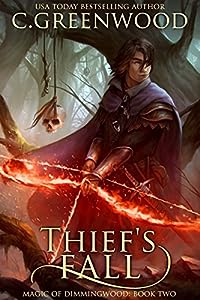 After losing his brother and being murdered by his enemies, Rideon thought there was nothing left that could hurt him. But he soon discovers life only gets more dangerous after death. Restored by magic, he must trek through a hostile wilderness while stalked by a deranged wild man. His only possessions, a cursed bow and a powerful amulet, prove as treacherous as they are necessary.

Driven by the need to find his young brother before their enemies reach the boy first, Rideon must enter dangerous territory and risk the wrath of the ruthless thieves’ guild and its cunning king.