Now I remember why I do not do winter gardens. The holidays. Those things keep me so busy I have no time to be tending to fresh veggies. I was looking at my calendar to plan my oldest basset’s birthday party, and by the looks of it we don’t have time to do it until a few weeks after his birthday. When I was in high school I could only dream of having such a busy social calendar. Now I am dreaming of a free weekend. If I could go back in time I would tell myself to rest now because it will get crazy later. I would also tell myself to eat more cake while my metabolism was still high. 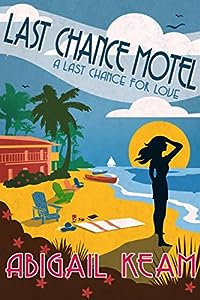 Eva Hanover – a brilliant career, a gorgeous brownstone in Brooklyn, and a sexy husband. Or, at least, she thinks so. In a wink of an eye, Eva’s husband leaves her. She loses the brownstone and her career. With only the clothes on her back, she flees cold New York for the sunnier climate of Key Largo.

As Eva puts it, her marriage went south and so does she. Stuck in Key Largo, it is sink or swim for the devastated Eva. Starting over is hard for anyone, but Eva wonders if she can. Determined to make a new life, Eva buys a rundown mid-century motel and renovates it. She hires Mike Bishop for her general contractor, but from the very beginning they cross swords of how to remodel the Last Chance Motel. It irritates Eva that many of Mike’s ideas are betters than hers. It couldn’t be that Mike bothers her because he is handsome, sexy, and rugged, could it? Eva needs is a handsome and sexy man around her like she needs another hole in her head. Yet, she finds herself drawn to Mike and is grateful for his help.

In the midst of the motel’s renovation and her growing feelings for Mike, her ex-husband shows up and begs for her forgiveness, saying the divorce was a mistake. He wants her back.

What is Eva to do? Does she throw in the towel on the motel and go back to her ex, or does she stick with the renovation and Mike? One thing Eva does know, as the Last Chance Motel comes back to life, so does she. Step by step, Eva is determined to find purpose and happiness in life again. The question is how and with which man? 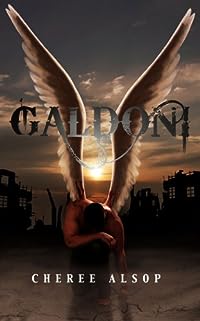 “This is the Arena, and here we live to die.” This is the motto of genetically-altered gladiators, the winged humans called Galdoni. Kale, nursed back from the brink of death by students, is given the chance to experience life as a human. When he is captured, he has to use what he learned in the world outside the Academy in order to free the other Galdoni and return to the human girl he loves. 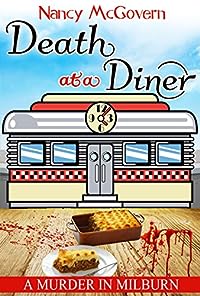 Death At A Diner: A Culinary Cozy Mystery With A Delicious Recipe, NEW EDITION UPDATED FEB 2017 (A Murder In Milburn)
by Nancy McGovern

Nora Newberry has been working to make her dreams come true and finally, after 10 years, it’s time! She’s moved back to her hometown of Milburn, Wyoming, and, together with her lifelong best friend, Raquel Madden, is opening the diner they’ve been planning since high school. Life couldn’t be better… and it’s time to celebrate!

Sadly, the celebration doesn’t last long. Just three days before the diner is set to open its doors, Raquel is found murdered. And with no clear motive and little cooperation from the townspeople, Nora is thrown into a murder investigation that just may cause her to lose her own life. 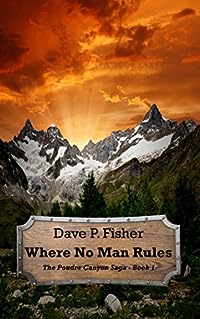 Where No Man Rules (The Poudre Canyon Saga Book 1)
by Dave P. Fisher

Behind Jean and Andre Pelletier lay Quebec, their livelihoods as Voyageurs, and the body of Claude LeSueur who had flung his final insult in Jean’s face. In a sudden flash of rage, witnessed only by his brother, Andre, Jean had plunged his knife into the heart of wealthy fur merchant Maurice LeSueur’s son. Together, the young trappers flee westward ahead of the hangman and the wrath of Maurice LeSueur, a controller for the powerful Northwest Fur Company.
As the brothers make their way along the wilderness waterways they learn that LeSueur has engaged two murderous river pirates, Joseph Quesnel and his partner Carcajou, to hunt them. Quesnel, who harbors his own hatred for Jean Pelletier, manipulates LeSueur and his money for his own dark purposes. Jean knows the race has become even more desperate and makes the decision to escape into the American West, a decision that establishes the pattern for the men they will become.
Making their way into the Rocky Mountains of 1824, the brothers meld into the world of free trappers and Indians, becoming one with them. Years pass and thoughts of Canada and the LeSueurs become faded memories until the day Jean’s past comes back and threatens the new life he has so carefully built. 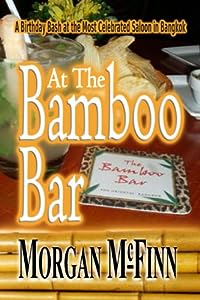 At the Bamboo Bar
by Morgan McFinn

A Birthday Bash at the Most Celebrated Saloon in Bangkok

Step Inside for a Great Lounge Act…
Well, in defiance of the local bookmakers and most members of the medical profession, McFinn somehow managed to reach the fifty-year marker. To commemorate the occasion he spent the evening with at the Bamboo Bar in Bangkok’s famed Oriental Hotel. It was kind of a surprise party. McFinn had invited a few of his friends to join him – and none had shown up. He was really surprised. So, buy this book and you can join him instead.

It was like no evening the Bamboo Bar has ever experienced before. Play readings, lovemaking, a dead guy in a brown suit, lots of top-shelf booze, and a cast of characters that animate McFinn’s inimically amusing style. As always the dialogue sparkles with wit…
Think of this book as a bottle of Irish whiskey. It’s real smooth. With any luck you’ll be drunk with laughter before the evening’s out and the sun comes out.