Dark, telling and oh, so compelling. From the Dark is a must read adventure from Andy Huang that is sure to turn into a masterful series. If you love dark sci-fi series, then get in on the ground floor with this one. 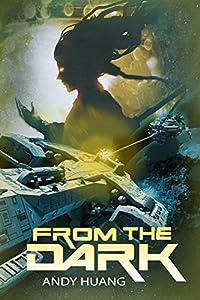 From the Dark (Nightfall Book 1)
by Andy Huang

Injected with a cerebral implant he didn’t want and can’t remove, Gerrard Meyers must unravel its secret or be consumed by what lies within.

The former Navy lieutenant is catapulted into a terrifying world of clandestine manipulations and the secret behind the spacecraft control technology – the Whisper.

He joins Inca, a super-soldier who must fight her own nation to save it; and Strontium, an Undersecretary of Defense with a chance to expose the horrific origins of the Whisper, but only by allowing pirates to invade his homeworld.

To survive the coming war, Gerrard must first overcome the most dangerous enemy – his own troubled mind.

If you enjoy adventure, space battles, and spy intrigue, you’ll be sure to love this smashing debut novel from independent author and spaceship enthusiast Andy Huang.