I had no idea that my sweet, fun loving chickie Trudy was secretly a karate master. Yesterday the ladies were enjoying the sunshine and digging for bugs in the backyard when little Junebug decided to join them. She didn’t run up to them or even make eye contact. She only had her nose to the ground and was getting the news when Trudy decided to give her a message. A message delivered with two huge feet landing on her back and finishing with a double slap of the wings to that sweet puppy’s face. Then Trudy disappeared into the pumpkin patch. Such skill, Such grace. So uncalled for. Little Junebug was shocked, but not injured. If Trudy wanted to actually cause damage she could have. I think she was just sending a message. Junebug got the message and stayed clear of them for the rest of the afternoon. 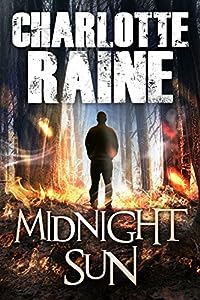 Wyatt, Alaska is a place of family, beauty, and unspeakable tragedy.

A couple of years after Aaron Grant lost his wife and daughter in a fire, one of his daughter’s best friends, Sarah, is kidnapped.

After spending the last two years as the town drunk, he reluctantly investigates the kidnapping along with the ambitious FBI Agent Teresa Daniels.

The case takes several twists and turns, which will end up leaving the whole town of Wyatt in the wake of destruction. In the Arctic and Antarctic Circles, the sun never sets during the summer, but the light creates shadows, where anything can creep and kill. 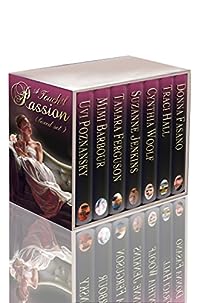 Lose yourself in a touch of passion. Whether it’s the beauty in a song or the magic of a kiss, the agony of heartbreak or the hunger of yearning, explore ecstasy and desire in these captivating full-length, award winning novels. Written by eight bestselling, USA Today and NY Times authors, this boxed set has it all: Historical Romance, Contemporary Romance, New Adult Romance, Victorian Romance, Western Romance, Romantic Suspense, Wounded Warrior Romance, Military Romance, and Literary Fiction. These sensual tales of love with a strong female lead will leave you with a smile on your lips and music in your heart.

Thanks to the readers who love the romance novels in this anthology, A Touch of Passion has just become the 2016 WINNER of The Romance Reviews Readers’ Choice Awards.

The Music of Us by Uvi Poznansky (Bestselling Author)
Lenny goes as far back as the moment he met Natasha during WWII, when he was a soldier and she — a star. Natasha was a riddle to him then, and with all the changes she has gone through, she still is.

Love Me Tender by Mimi Barbour (NY Times and USA Today Bestselling Author)
How could Anne return to Texas knowing that her son would be meeting a father who didn’t know he existed? And how could she go back to face the only man she’d ever truly loved?

That Unforgettable Kiss by Tamara Ferguson (Top-10 Bestselling Author, Romance Reviews Readers’ Choice Award Winner-New Adult)
Since Kate Callahan will be running the family construction business someday, she doesn’t have time for love. Until fate steps in by way of an unforgettable kiss from architectural intern Michael Murphy.

Perfect for Him by Suzanne Jenkins (Bestselling Author)
As they danced, Jason whispered words of love to Harley, while her oncologist’s terrifying diagnosis kept ricocheting in her skull. To ensure he’d be okay after she was gone, Harley would take matters of love into her own hands.

Nellie by Cynthia Woolf (Bestselling Author)
Saloon owner Blake Malone is a bachelor and likes it that way. Nellie Wallace, a widow, needs a husband but never expected a man like him. Can Nellie and Blake make a marriage out of mutual need, without love being involved?

Ambrosia by the Sea by Traci Hall (USA Today Bestselling Author)
After a bitter betrayal by her late husband, self-taught chef Celia Langdon moved to the sea, where dive shop owner Dax Smith dared her to heal from the heart.

The Single Daddy Club: Derrick by Donna Fasano (USA Today Bestselling Author)
Ex-military man Derrick is solitary and satisfied — until Timmy’s dropped into his lap and Derrick must become a daddy. Fate has denied Anna a family of her own, but she has plenty of love to give, if only someone would notice. 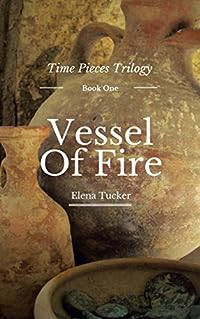 When archaeologist, Dr Lem Fort begins excavating the ruins of ancient Beit Sha’al, he unknowingly delves into the long-ago life of a young girl and potter, Tamar. Set across both contemporary times and the second century, Vessel of Fire draws a picture of life on the northwest corner of the Dead Sea during one of Judaism’s bravest and riskiest revolts against Rome. Tamar’s uncertainties, fears, and spiritual questions are not, in the end, that different from those of Ford who struggles with his own losses and temptations.

Vessel of Fire is the first book of the Time Pieces trilogy in which author Elena Tucker profiles a century of almost unthinkably different daily existence. It was a time of simplicity in the midst of unrest, a time when strict and established ways were turning inside out because of small communities today called Christian.
Yet the essence of life then was no different than it is today. And as he excavates three sites, archaeologist Lem Fort handles every coin, vessel, and sherd as his last connection with some long-forgotten individual; Fort recognizes these artifacts as pieces from time.

Far from empty remnants, Tucker’s “vessels” brim with imagination, soul, and period experiences. Breaking away from traditional Christian fiction, Vessel of Fire, Vessel of Strength, and Vessel of Hope follow humanity’s ongoing spiritual quest – as experienced by characters two millennia past, and by the archaeologist who sifts through their ruins.

Elena Tucker is an award-winning feature writer for a small-town Texas newspaper. She participated in her first archaeological excavation almost 30 years ago with her husband, a career Near East historian and archaeologist. 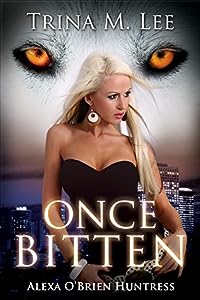 Alexa O’Brien has never been like other people. A hunter of supernatural rogues, she’s a werewolf with unusual but extraordinary power. Power that fiercely draws her to Arys, a mysterious vampire who awakens her dark side. What they create together is dangerous and binding, forcing her to question the source of her abilities. She risks losing her remaining humanity as well as the one man she dares to love.

When Alexa’s womanizing former lover and pack Alpha is framed for murder, he turns to her for help. She would like nothing more than to watch karma at work but as the body count rises, long buried secrets are exposed. Alexa is forced to face the painful truth that not everyone is who she thinks they are. Not even her. 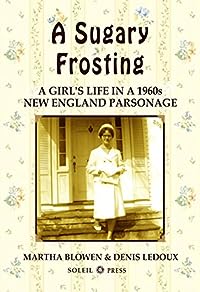 This memoir offers a glimpse into a world that is long past. The mores of everyday life have changed as has life in a parsonage. A Sugary Frosting / A Girl’s Life in A 1960s New England Parsonage reveals a bit of both. Especially poignant is its glimpse of an underside of being a preacher’s kid, a public role that is rife with challenges of supporting your minister father and your minister’s-wife mother and of becoming yourself, a person they may not have expected their household to have produced. Relationships in this memoir are portrayed honestly and sometimes not flatteringly. A Sugary Frosting, a phrase derived from Martha Blowen’s journals, is a memoir of surviving religious idealism and inherited belief to undertake to become one’s self.